ADF Is Ready for the War on Christmas

The Alliance Defense Fund is ready and eager to help Americans battle the Grinches of the ACLU. Here's a rundown of their resources, philosophy and agenda.

Meanwhile, here's a few things the ADF wants you to know:

* The U.S. Supreme Court has never ruled that public schools must ban the singing of religious Christmas carols or prohibit the distribution of candy canes or Christmas cards.

* School officials do not violate the Constitution by closing on religious holidays such as Christmas and Good Friday. 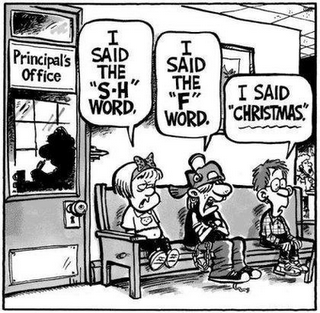 * School officials are not legally obligated to recognize all other religious holidays simply because they officially recognize Thanksgiving or Christmas.

* School officials may use "Christmas Vacation" to refer to the December holiday break without offending the Constitution.

* Government-sponsored Christmas displays are not banned as some people believe. When faced with the question of whether a Christmas display is constitutional, a court simply asks, "Is the government celebrating the holiday or promoting religion?" Often, the "Three Reindeer Rule" is used by courts, whereby a judge reasons that having a sufficient number of secular objects in close enough proximity to the Christmas item (such as a crèche) renders the overall display as a constitutional community observance of the holiday.
Posted by DH at 8:37 AM