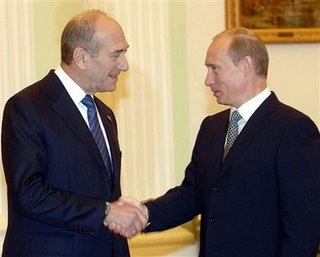 According to updates from Radio Free Europe, Vladimir Putin is in a spot of trouble on the eve of a Russia/European Union summit conference in Lahti, Finland. For instance, Kommersant, the Russian "online newspaper", commented yesterday that President Putin has a sense of humor...but only when he's dishing it out towards others.

The comment came after Putin was overheard disparaging Israeli President Moshe Katsav (who has recently been accused of sexual harassment) when Israeli Prime Minister Ehud Olmert (shown here shaking hands with Putin) came to call. Immediately after the press was ushered out -- but before the press microphones were turned off -- Putin jokingly praised the sexual prowess of Katsav. "Say hi to your president," said Putin. " He turned out to be quite a powerful guy! Raped 10 women! We're all surprised. We all envy him!"

In typical fashion, Putin's aides completely denied the quotation until informed there was a taped record of it. Oops. After that, the aides simply dismissed it as a mere joke.

But again, mean jokes like this seem to be okay to Putin if he is the comic delivering them. But it's a much different story when he is the butt of the joke. Case in point: after Putin called for increasing Russia's birthrate earlier this year, journalist Vladimir Rakhmankov dubbed the president, "Russia's phallic symbol." Crude, yes; but certainly less repulsive than joking about being envious of a serial rapist. But because Rakhmankov had been on record as opposing several elements of Putin's political agenda, he is now on trial for "insulting a representative of the state." As they say, comedy all depends on who slips on the banana peel.

And, in one more matter about Vladimir Putin's regime (this one very un-funny), Radio Free Europe reports that after the meeting with Putin, the Israeli Prime Minister had a stark message to Russian Jews -- "Pack your bags" and move to Israel!

This call, of course, comes on the heels of repeated Israeli concerns over Iran's nuclear program and the presence of Russian-made weapons in the hands of Hezbollah fighters in Lebanon. Israeli Cabinet Secretary Yisrael Maimon told reporters that Russian authorities have agreed to exercise greater "supervision over arms exports" in response to Israeli complaints, which the Israeli authorities backed up, by the way, with plenty of evidence. (Russia had previously denied that its arms exports to countries such as Syria could find their way to third parties.) At any rate, Olmert believes that Russia is definitely not the place for Jews to find a safe and free haven and encouraged Israel to be their new home.
Posted by DH at 5:45 PM