Over at Luis M. Garcia's blog (Garcia is the author of Child of the Revolution), he made this wonderfully wry observation about yet another irrational complement to Castro's Cuba...

The good news about those Havana blackouts 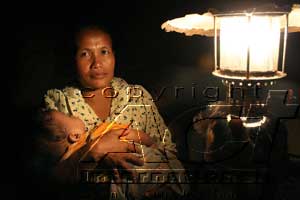 The World Wildlife Fund has just unveiled its 2006 Living Planet Report, which looks at the impact human activity is having on wildlife.

Very commendable. Except that the report has concluded that Cuba is probably the only country in the world with “sustainable development”.

The rationale? One of the report’s authors, Jonathan Loh, cited the country's high literacy rate, long life expectancy … and the fact that Cuba has a “surprisingly” low consumption of energy.

Nothing surprising there - at least in relation to energy use.

The fact is that under the Castro regime the electricity system doesn’t work, public transport is virtually non existent, private cars are restricted to officials and tourists, air conditioning is a rarity, and what little heavy industry was in place during the 1970s and 1980s disappeared completely following the collapse of the Soviet Union.

So, no energy equals no pollution equals sustainable development.