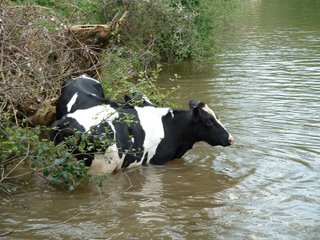 All creatures great and small yearn for free air to breathe...even if it takes the bold courage to swim their way to liberty. That's exactly the case with a huge herd of cows that, over the last several months, have dared the currents of the Bug River to escape Alexander Lukashenka's repressive Belarus and make it into Poland.

The cows, none of whom made any public comment on why they left (Belarus has strict punishments for those voicing criticism of the government and its officials), traveled illegally without authorized visas.

In roughly this same time period, Polish border guards have deported over 2,000 illegal emigrants coming into the European Union from other countries, including the Ukraine, Russia and Communist Belarus. But this is the first time they've been asked to perform the thankless task of deporting livestock.

Poland’s chief veterinarian Krzystof Jazdrewski was reported to have said the cows were most likely looking for better grazing land. However, I contend that it was the poverty, corruption and increasing tensions produced by Lukashenka's police state that drove the "mad cows" westward across the river.

Furthermore, Jazdrewski contends that in such herds there is usually one leader "and if the leader goes somewhere, the rest of the herd follows." The Belarusian KGB, upon reading this report, began extensive inquiries designed to discover just who this "leader" was, who were his principal contacts outside Belarus, and what pressures could most effectively be brought to bear upon him.

The Polish veterinarians, border officials, and a few "enlightened" journalists tried to convince the cows to swim back across the river to Belarus but, as the news reports said, "the animals didn’t want to go back home." In fact, upon learning what was in store for them, the cows broke and ran.

Only about 50 of these political refugees have been captured as yet and, alas, returned back across the border where an uncertain but possibly ominous fate awaits them.

Here's the Radio Polonia story.
Posted by DH at 7:03 PM