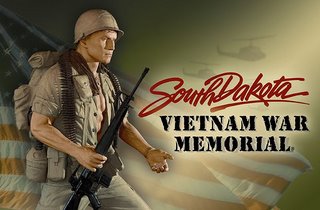 You didn't hear a thing about this in the MSM but over 30,000 people came to Pierre, South Dakota this past weekend to celebrate the dedication of a Vietnam War Memorial.

That silence from the media isn't a new mistake, of course, but it still represents a crying shame.

However, if you would like to know more about what happened, here are a couple of links to follow. This AP story was the only national coverage and you'll see it is very brief. Worse yet, even this tiny story was picked up by a mere handful of other papers and stations around the country. Searching around, I did find one unique story though. It comes from KTIV in Sioux City and it included this moving observation:

...Richard Charging Eagle served in Vietnam as a marine for 13 months before shrapnel wounds in his back earned him a ticket home. In the Lakota culture, warriors are often highly regarded. But that wasn't the case for him after Vietnam. That's why this weekend's ceremony meant so much. Richard Charging Eagle says..."finally someone recognizes Vietnam veterans here in the state of South Dakota, because we were forgotten. We were literally forgotten. We were hated. Some people they hated us."

Which is why many vietnam vets didn't like talking about their experiences until this weekend. Charging Eagle says..."sometimes we acknowledge each other from a distance. But today we get to hug each other. We get a good, long handshake. And a little tears." Tears that for far too long have been bottled up inside...

And also, here's a newspaper interview of Omahans Ken and Liz Korkow which explains a bit about how spiritual issues were covered at the event. The Korkows, longtime leaders of Omaha's Christian Businessmen's Committee, were months in organizing a series of outreaches for the weekend called "South Dakota Salutes." At one of those events, a worship and fellowship service, the following incidents were stimulated. Here's how the Capital Journal described them:

...Brian Ascherin, a friend of Ken Korkow, stated that during the weekend's dedication events, he was approached by a man who shook his hand and said, "Welcome home." 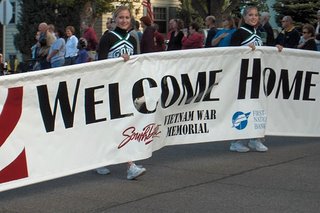 With tears welling in his eyes, Ascherin continued, "That's the first time anyone ever really said that to me. So at the parade I stuck my hand out and said to someone, 'Welcome home.'"

According to Ascherin, he hoped the day would help others and himself "deal with some of the hurt and anger still inside" from the war.

Many veterans in attendance had the same response to the day's events and said, "I haven't talked about some of these things for 30 years."

For more on the Memorial, check out its home page over here and be sure to watch the slideshow. You might also enjoy the uploaded photos from the event from a Mrs. Darcy. Those can be found here.