Catastrophe -- The Bush Support of Plan B 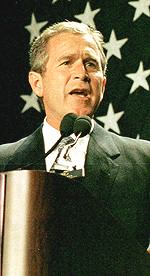 There is no way to spin this one away. President George Bush's support of the FDA's Morning After Pill policy was an alarmingly wicked move, one that ignored science, risks women's health, infuriated his most loyal supporters, and launched a new wave of deadly poisons against preborn children.

Here is a very good article reviewing the matter in First Things. It is written by Charlotte Allen, a Senior Editor of Crisis and author of The Human Christ: The Search for the Historical Jesus. She's right on.

And, in a very relevant blast from the past, here is Charlotte Allen's response to the first major cave-in of President Bush; namely, his stem cell "compromise" back in 2001.