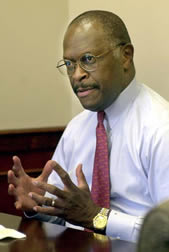 With the balance of power in Congress hanging in the air, a leading African American businessman says black voters in the United States should put their historical pro-life values above political party. That means voting for pro-life candidates rather than supporting Democratic candidates across the board.

Herman Cain is best known as the former chairman and CEO of Godfather’s Pizza. He is a political commentator and was a candidate for the U.S. Senate.

Cain will underscore that message with a $1 million advertising campaign in key states and congressional districts targeting black radio programs and urban radio stations young African Americans enjoy. Some of the ads focus on abortion.

The campaign is a second go-round based on a highly successful Ohio campaign in 2004 that helped President Bush garner 17% of the African American vote in the Buckeye State – double his vote total from the 2000 presidential race...

Read the rest of this LifeNews story right here.
Posted by DH at 10:33 AM