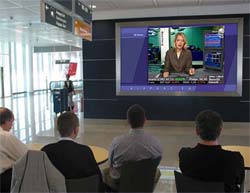 ...This has become my major issue with air travel, worse even than having to throw away my shaving cream and toothpaste. (Want a stock tip? Invest in a company that makes really, really small toiletries.) The airports of America--as far as I can tell, there aren't any exceptions--have entered into a contract with CNN whereby CNN's outrageously one-sided coverage blares non-stop at every airline gate in the U.S. Talk about a captive audience! You really don't have any choice but to sit at the gate, waiting for your plane to load, and the volume is turned up so loud that you can't miss a single snarky attack on the Bush administration. Frankly, I think I'd rather be waterboarded. Do you suppose John McCain can do something about this?

This is just one of many manifestations of the fact that the Democratic Party is the "home team" of American politics. CNN is the "official" news network, viewed by corporate America as neutral and unobjectionable even though, in fact, it is relentlessly liberal. If anyone proposed that they shift the contract over to Fox, for the sake of more competent news coverage if nothing else, the reaction would be: we can't do that, Fox is conservative! It isn't, actually, for the most part. But occasional moments of conservatism will drive a network more or less underground, while constant liberalism is considered middle of the road, and suitable for infliction--like it or not--on the air travelers of America...

Amen! This opinion, voiced by Power Line's John Hinderaker, is shared by many, many American air travelers. But let's not merely complain to each other, okay? Let's take our complaints to the guys and gals that can do something about it. That's right; why not share your sentiments with a couple of your most-frequented airports and airlines?

For example -- United Airlines can be contacted through Glenn F. Tilton, their Chairman, President & CEO at United Airlines, Box 66919, Chicago IL 60666 whereas Gerald Grinstein
is the President and CEO of Delta. His address is Box 20706, Hartsfield-Atlanta Int'l Airport, Atlanta GA 30320. Any other airline contacts you're looking for can be found right here in this updated FAA document.

And for the airport contacts themselves, here's what you do.

Go to this page and note the last two boxes in the form there. Set the box titled "Facility Use" to PUBLIC-USE and the last box, titled "Part 139 Certification," to CERTIFIED. Then hit "Submit" and you'll go to a page headed "Airport Data (5010) & Contact Information." There you'll see (just a little ways down) a link to "Airport Contact Information". Bingo! There's your addresses. Sorry, it doesn't connect directly but, trust me, it's pretty easy to locate.

Once you get there, you'll see a list (alphabetized by state) that will give you...say, such manager addresses as Denver International's Turner West (ADMIN BLDG, 8400 PENA BLVD., DENVER, CO 80249) and O'Hare's Patrick Harney (BOX 66142, CHICAGO, IL 60666), and just about any others you can think of.

Be polite. Be sweet. But don't fail to tell these misguided folks that it's way past time for a little balance. Fox News every other day? American Bandstand re-runs? Or, to get real drastic, how about a few nooks and crannies available without any piped-in noise at all? Wouldn't that be a treat?

Oh yes; be sure and read the entirety of Mr. Hinderaker's Power Line post. You'll find it over here.
Posted by DH at 5:00 PM