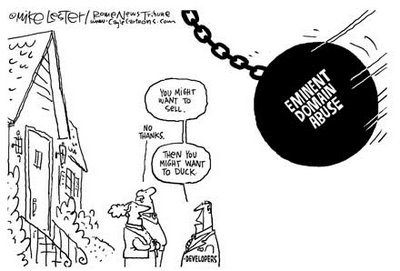 Remember the Kelo v City of New London ruling, the 5 to 4 Supreme Court decision from last year that opened the barn door for government bodies to confiscate private and transfer it to another private party for development? Yes, the proprty must be paid for, but the owner is not allowed to set the price he wants. Is that fair? And what if he just doesn't want to sell -- period?

But, hey -- wasn't Kelo a hugely unpopular decision? And weren't politicians from both parties quickly promising to eliminate this bold new threat to private proprty rights? So, wouldn't towns and cities behave themselves and forego applying the power that had been handed to them?


Like an episode of Supermarket Sweep, the only thing that mattered for many "town fathers" was how much they could scoop up before the buzzer rang.

`...What happened after Kelo was an explosion at every level,'' said Dana Berliner, an attorney for the Institute for Justice, an Arlington, Virginia, advocacy group that plans to represent Riviera Beach property owners challenging the redevelopment plan. ``In some states there's a sense that at some point the law is going to change. They'd better get as many projects started, property acquired, before that happens...''

...The Institute for Justice says it has identified almost 5,800 instances in which agencies at least threatened to seize properties for transfer to other private parties in the year following the Kelo decision. That's up from an average of about 2,000 annually in the five preceding years, according to the group's figures...

The above paragraphs in itilacs are from an unsettling article written by Greg Stohr for Bloomberg.com. It's an important read and you can check it out right here.
Posted by DH at 12:50 PM