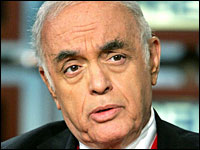 One of the topics discussed in this week's Novak-Evans Political Report is the media's under-reporting of the dramatic gains made by the Right in last week's primary elections. Here's a lengthy (but well worth the time) sample:

President Bush's closest political lieutenants were not happy about Schwarz's loss. Bush backed him and contributed to his re-election effort with automated phone calls, even though Schwarz had opposed the President on key issues such as stem-cell research, the environment and population control. In the end, though, Schwarz was probably too liberal for the district. He won in 2004 over a crowded field full of conservatives, and it made him a target for the Club for Growth.

Walberg's victory for a House nomination, of course, should carry less weight than a Senate seat. But it is also part of a much larger trend that promises to make the GOP caucus in the House more conservative after the 2006 election, whether or not they hold on to their majority. Even before Schwarz's downfall, several primaries had shaken out in a way that ensures that sitting and exiting congressmen will be replaced by more conservative lawmakers.

The trend began with primary victories by conservatives in several key open-seat races.

The same is true of Walberg. Despite worries privately expressed by Bush advisors about keeping the seat, Walberg will have an easy time winning in November over organic farmer Sharon Marie Renier (D), whose campaign reports a current negative cash balance of $1,209.

In other cases, the general election outcome is far less certain, but the nominees are still more conservative and more outspoken than the members they hope to replace.

Only in two cases has a more moderate candidate replaced a more conservative member. One such winner is Rep. Brian Bilbray (R-Calif.), who won a special election to succeed disgraced Rep. Duke Cunningham (R-Calif.) after the latter's conviction on bribery charges. The other came in Tuesday night's Nevada primary, won (as we predicted) by Dean Heller (R).

Moreover, some of the House's few moderate and liberal Republicans figure prominently among those most likely to lose their seats to Democrats. Moderate-liberal Rep. Chris Shays (R-Conn.) is considered to be in grave danger, and moderate Rep. Rob Simmons (R-Conn.) in slightly less danger. Rep. Deborah Pryce (R-Ohio) is facing her toughest race yet. The seat of retiring moderate Rep. Jim Kolbe (R-Ariz.) has a great chance of going Democratic.

One lesson is that Republican voters are disappointed in the failure of Republican leadership in Washington to deliver on key domestic issues important to the right. Conservatives grumble that the administration has used so much political capital on the Iraq War that it has been powerless to advance other priorities -- spending reductions, earmark reform, and social issues such as marriage protection, entitlement reform and tax reduction, to name a few examples. A more conservative Congress will be needed to deliver on ANWR drilling and a host of other issues dear to conservatives.

Also significant is the number of current and former state legislators on the list of conservatives. This is the culmination of a long-term effort to build a more serious farm team of identifiable conservatives on the state level. This has been the baby of several activist groups on the right, including Americans for Tax Reform, whose "no-tax" pledge has become something like a seal of approval. All of the conservative hopefuls listed above are pledge-signers. With the clear identification of a conservative "team," it is easy for a group like the Club for Growth to swoop in and fund a serious, conservative candidate who can actually win.

This is a large phenomenon, so again, the lack of media attention is curious. One explanation recently offered is the tendency of the major news organs to engage in "Democratic strategizing" as they analyze political races. The right or wrong of this is irrelevant to us -- the phenomenon is noteworthy because it is real and it actually could be affecting the political landscape...

If you'd like to get in on the insightful reports provided by Bob Novak and his team, click on this link to find out how.
Posted by DH at 4:44 AM