The White Buffalo Calf Woman Speaks from the Great Beyond...In Favor of Abortion 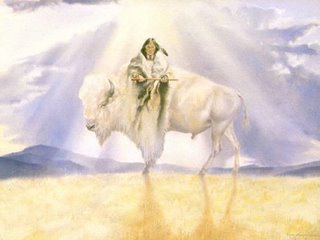 If anything, Judy Peres' story in the Chicago Tribune demonstrates that she must have skipped a few of her journalism classes. Sure, her article (which covers the Cecelia Fire Thunder controversy) reveals the bias towards abortion that one regularly sees in the MSM. That's no surprise. But Ms. Peres' disorganized, rambling, fitfully written prose is. The Tribune used to require better work than this.

At any rate, the article does have a few points of interest, especially those relating to former Chief Fire Thunder's introduction of the White Buffalo Calf Woman to lend divine assistance to her campaign to put a Planned Parenthood abortion clinic on "her" Oglala Sioux reservation.
Posted by DH at 12:33 PM