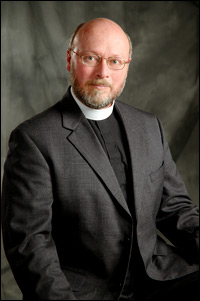 Marriage is designed by God to be a union between one man and one woman -- despite the protestations of liberal Protestant denominations determined to differ from their Maker on that point. But it seems that even when the union does involve the correct sexes, these denominations still want things their way instead of the clear mandate of Holy Scripture. Case in point -- the ordination last month of Barry Beisner to become a California Bishop of the Episcopal Church who, by the way, is twice divorced and now on his third marriage.

There is a very interesting and detailed report on the debate surrounding the decision from VirtueOnline, The Voice for Global Orthodox Anglicanism right here.

And, you guessed it, the delegates to the conference did not ask either of the former Mrs. Beisners to give testimony to the good Bishop's character. After all, the Episcopal Church is a progressive, forward-looking denomination and things like former wives are so...yesterday.
Posted by DH at 11:29 AM