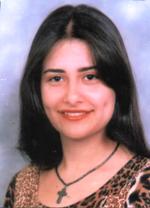 For more than a generation now, thousands of Coptic Christian girls have been kidnapped each year by Muslim criminals in Egypt. Egypt being, of course, yet one more American ally who receives our protection, our tourists and millions of our foreign aid dollars without ever being required to clean up their act.

Here is the story from Christian News Wire that caught my attention today (an excerpt of which is printed below) and over here are a couple of heartbreaking examples of what's going on in Egypt, including the account of Neveen Morcos (shown at right) whose disappearance has yet to be solved.

...In “Confessions of a Former Islamist,” published by FrontPage Magazine in 2005, Ahmed Awny Shalakamy details his cruel work of drugging, kidnapping and raping Coptic females, and says he was paid by one of the Islamic proselytizing organizations to do this. Shalakamy’s account was first reported by Maria Sliwa of Freedom Now News, who says that the Egyptian Government’s silence in response to these crimes is deafening.

While Egypt has chosen to ignore its 800-year-old traditional laws, which are family laws specifically for Christians, it has opted to implement legislation based on Islamic law (Islamic Shariaa or codes), which discriminates against non-Muslims...

After saying a prayer for the relief of Egyptian girls from this violent, unjust terrorism, you might want to send a brief message to the President, the U.S. State Department and other appropriate agencies (including your Senators and Congressmen), expressing your hope that America begin requiring some basic standards of decency, justice and freedom be shown by foreign powers before they get the next installments of our taxpayer's money.