Of Pork, Boondoggles and Republican Hypocrisy 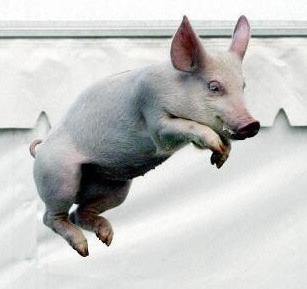 I hope Tim Chapman's Town Hall column today will be an eye-opener to those Republicans and Republican-leaning Independents who are yet unmoved to anger by the "new G.O.P." and its addiction to government spending. With few exceptions, the modern Republican Party is as deeply entrenched in wasteful expenditures (with the resultant escalation of taxation) as are the Democrats.

And here's a bonus feature highlighting just one example of extra-Congressional boondoggling. It comes from The Waste Basket, a weekly bulletin of government waste that you'll find as a feature of the Taxpayers for Common Sense website. Here's an excerpt:

Every year, Uncle Sam pays contractors $320 billion to assist with government activities. These contractors purchase or produce everything from computers and highway infrastructure to hand soap and office supplies, making the federal government dependant on their expertise. Trouble is, while the amount of money private companies receive from the government skyrockets, the number of eyes watching how they spend our money is getting smaller and less effective.

The FBI’s effort to build the Trilogy case-management system is a perfect example. This project has already sucked down $537 million worth of taxpayer dollars, and failed to do anything that will help the FBI enhance its investigative capabilities. This week, the FBI announced it would spend an additional $425 million to finish a different case management system, the “Sentinel.”

A new report by the Government Accountability Office (GAO) found that the lack of oversight turned this project into what could be a new hit television show “Contractors Gone Wild...”
Posted by DH at 7:15 AM