The Issue Really Changes When Its Your Own Unborn Child 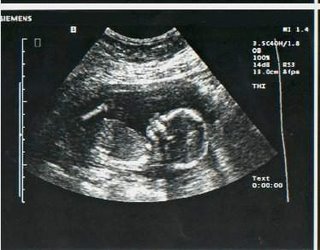 It all depends on your perspective.

In this very interesting story from (now, don't giggle) Lost Budgie Blog, we learn how a very liberal TV program from Canada has begun broadcasting the most delightful pro-life news reports. The reason? The host is pregnant! Thus, viewers are learning neat stuff about the humanity of the preborn child including videos of the 3D ultrasound showing the host's child moving around her soft, safe world. Very cool.

It is an example of how technology has dramatically helped shift public attitudes about abortion. The lines "It's not really a baby" or "It's just a bunch of parasite tissue" no longer are tossed around in the debate...except perhaps by Planned Parenthood folks. But thinking people who are honest and at least a little warmhearted are finding that such things as the "windows to the womb" provided by ultrasound, the remarkable developments in fetal surgery, the ever-increasing ability of doctors to bring even extremely premature babies to healthy outcomes, and so on, have changed forever the argument in favor of the baby -- and, albeit too, in favor of those who have for decades stood in the babies' defense.