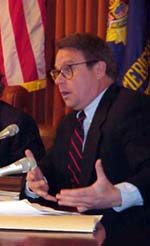 Clicking on the title of this post will take you to the full text of Congressman Chris Smith's bold introduction to today's hearing but at least here is the opening...

The Subcommittee will come to order, and good morning to everyone. Today's hearing of the Subcommittee on Africa, Global Human Rights and International Operations will examine China's human rights record, especially such areas as China's censorship of the internet, implementation of the right of Chinese citizens to worship freely, protection of minority rights, compliance with international labor standards, China's barbaric practice of organ harvesting, and the destructive effects on Chinese society - especially on women - of its government's coercive one-child policy.

Over the years, I have held more than 25 hearings on human rights abuses in China. While China's economy has proved somewhat, the human rights situation remains abysmal. So-called econom

ic reform has utterly failed to result in the protection of freedom of speech, expression, or assembly. This week's visit of President Hu Jintao of China to the United States provides the U.S. Congress and people an opportunity to bring to the attention of U.S. policy makers and the world community the terrible human rights situation as it exists in China today. It will also help provide the vital context for any relationship we should have with China. And it will, I hope convey our unshakeable resolve and commitment to press Beijing for serious, measurable and durable reform. The people of China deserve no less. It is our moral duty to stand with the oppressed, not with the oppressor.

State Department human rights reports and the consistent reporting from very reputable NGOs indicate that Chinese government repression of its citizens continues. In fact, the current Chinese regime is one of the very worst violators of human rights in the world, and continues to commit egregious crimes against its own citizens daily. At a rough count, the most recent State Department Human Rights Report for China ran to about 45,000 words. Before it even gets down to details, the report lists 22 major rights problems. Few if any nations can even begin to match this unseemly record, from the systematic denial of political freedom and use of torture to interference in the most private matters of family and conscience.

1. Denial of the right to change the government

3. Torture and coerced confessions of prisoners

4. Harassment, detention, and imprisonment of those perceived as threatening to party and government authority

6. A politically controlled judiciary and a lack of due process in certain cases, especially those involving dissidents

7. Detention of political prisoners, including those convicted of disclosing state secrets and subversion, those convicted under the now-abolished crime of counterrevolution, and those jailed in connection with the 1989 Tiananmen demonstrations

8. House arrest and other nonjudicially approved surveillance and detention of dissidents

10. Use of a coercive birth limitation policy, in some cases resulting in forced

11. Increased restrictions on freedom of speech and the press; closure of newspapers and journals; banning of politically sensitive books, periodicals, and films; and jamming of some broadcast signals

12. Restrictions on the freedom of assembly, including detention and abuse of demonstrators and petitioners

14. Restrictions on the freedom of travel, especially for politically sensitive and underground religious figures

15. Forcible repatriation of North Koreans and inadequate protection of many refugees

18. Trafficking in women and children

19. Societal discrimination against women, minorities, and persons with disabilities

20. Cultural and religious repression of minorities in Tibetan areas and Muslim areas of Xinjiang

21. Restriction of labor rights, including freedom of association, the right to organize and bargain collectively, and worker health and safety forced labor, including prison labor)...
Posted by DH at 5:47 PM