Why the Distorted Reporting on Muslim Violence? 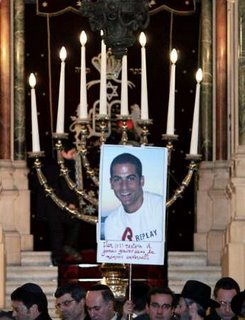 John Leo has a probing column over at Town Hall about the underreporting of the violence, terrorism, and militancy of Muslim thugs. He describes the particularly horrorific example of the murder of Ilan Halimi, a French Jew...

We now know that Halimi was killed as a classic expression of Jew Hatred. But with so much evasiveness and misdirection by police, government and press, it took a month to get that fact clearly on the table. Halimi, a cell phone salesman, was kidnapped and held for ransom by a mostly Muslim gang. He was horrifically tortured for three weeks, then slain. From time to time, neighbors had come to watch the torture or to participate in it. Nobody called the gendarmes. At first the government and the press presented this story as a straightforward kidnapping for ransom. A spokesman said Jewishnesss may have played a role simply because the kidnappers thought Jews were rich. AP and UPI, in feeds to the U.S., barely mentioned the possibility of anti-Semitism. After arrests were made, the BBC worked hard to avoid using the word “Muslim,” though verses from the Koran were recited during the torture.

The Los Angeles Times account of February 28 shows how hard candor can be. It reported that the gang made hundreds of abusive phone calls to Jews and had systematically tried to kidnap Jews. But the reporters wrote this: “Rather than a premeditated anti-Semitic murder, it seems a more complex product of criminality and dysfunction in the narrow world of thug culture: a poisonous mentality that designates Jews as enemies along with other faces of ‘outsiders.’” Oh, please. If whites had tortured and killed a black man, I doubt that reporters would be carrying on about how complex and unpremeditated it all was. They would just say it was a lynching

In an excellent article last week, Colin Nickerson of the Boston Globe said the crime was being attributed to a “predominantly Muslim youth gang” notorious for “virulent anti-Semitism.” The gang’s taunting phone calls to Halimi’s father were filled with anti-Semitic slurs and a rabbi had been told, “We have a Jew.” The Globe said hatred of Jews is now a hallmark of what’s cool in France, even among young immigrants from non-Muslim nations. Very strong article. No dancing around, just good reporting...

Here is the whole column -- and here is the one he mentions by Tony Blankley dealing with the same sad issue. And here's yet one more from an earlier Vital Signs Blog post.
Posted by DH at 12:17 PM