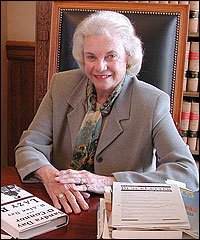 The poor woman has lost her job; lost her cool; and now it appears, she's lost her mind.

Read this story from the (U.K.) Guardian to learn how O'Connor is terrified not by terrorists, thugs or her fellow tyrants in the black robes but by simple, prayerful people who sought to keep Terri Schiavo from being murdered via forced starvation and dehydration.

O'Connor should take even a cursory look at how far afield her own Court decisions have strayed from American public opinion (let alone the U.S. Constitution). She might then realize where the danger of dictatorship really looms.
Posted by DH at 9:20 PM