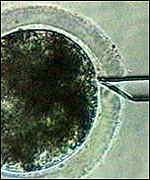 A recent AP story headlined, "Stem Cell Potential Said to Be Undimmed," is a prime example of how the media allows scientists playing the stem cell game to go completely unchallenged by the evidence. But then, why bring up facts of any kind when obfuscation, errors and politically-correct fables take you where you want to go?

The South Korean stem cell scandal has set back researchers and eroded public trust, but it has not undermined hopes for treatments for a wide variety of diseases, scientists said Friday.

"It does not dim the promise. It's just that we still have to do some basic things we thought we had done," said Sean Morrison, of the Howard Hughes Medical Institute and University of Michigan.

Doesn't dim the promise? What promise? The established fact is that "patient-specific" stem cells cannot be successfully produced because of the foreign mitochondrial DNA from the oocyte used. Tests have demonstrated this time and again.

Nevertheless, because the embryonic stem cell myth pushes forward the frontiers of genetic manipulation, cloning, abortion and the dream of creating a production line of perfect people, the myth makers (be they scientists or journalists) continue bleating the lie that "stem cells" from cloned embryos will not cause immune rejection reactions when injected into the patients.

Lies and lots of money. That's what is fueling the ESCR madness. But the end results are doomed to be more dashed hopes, more deterioration of medical ethics, and more time wasted from finding real cures.