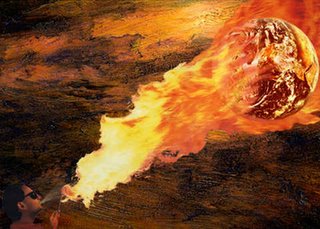 You've seen the stories about evangelicals coming out against President Bush and his "failure" to address global warming issues? Well, what you haven't seen is where this leftist ploy received its initiative. How about $475,000 from the aggresively pro-abortion Hewlett Foundation. Check out the rest of the story here.

Wendy Wright, President of Concerned Women for America says “Hewlett Foundation is one of the most prodigious and unabashed funders of abortion causes, with much money going to make abortion acceptable. Its significant grant for this initiative, along with the controversial Rockefeller Brothers Foundation, reveals where this effort could lead. They would not fund something that contradicts their main missions.”

“The radical environmental, pro-abortion lobby has learned to adopt language to win over unsuspecting, well-intentioned people. I am sure that most of the evangelical leaders who signed on have no idea of the history and missions of the groups that have made this initiative possible with their financial backing,” said Wright.

But an obvious question must be, "Why would these evangelicals fall for the claptrap spouted by radical environmentalists in the first place?" The answer is one that fits so many others dealing with the evangelicals' surrender to modernism of all sorts -- they love being hip more than they love being right.
Posted by DH at 1:10 PM