In Alabama, They're Chipping Away at the Philosophy of Roe 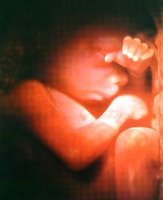 The Alabama District Attorneys Association changed its mind yesterday and announced its support for a bill making an unborn child a second victim when a pregnant woman is killed. This decision greatly increases the possibility that this bill will soon become Alabama law. It is already supported by the governor, the attorney general, and the majority of the state's population -- and the bill passed the House in a 97-0 vote!

The bill still needs to get out of the state's Senate Judiciary Committee where other pro-life bills have been defeated so prayers remain definitely in order. But Tuesday's announcement was a cause for significant hope.

Bills like this one in Alabama are proof that pro-life educators, activists, and intercessors have succeeded in keeping the sanctity of life banner held high despite the tremendous tragedy of Roe vs Wade over 30 years ago. Indeed, efforts like this one reveal the increasing power of the pro-life cause in state legislatures.
Posted by DH at 7:13 AM