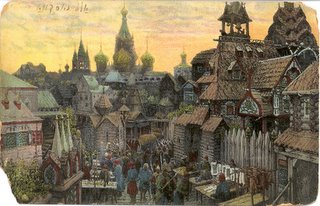 According to the Russian government itself, 70 percent of all pregnancies in Russia end in abortion. Little wonder that the resulting demographic crisis has more than a few alarmed. However, as several countries in Western Europe have discovered, it was a lot easier to let the demons of abortion out of Pandora's box than it is to get them back in.

At least 1.6 million Russian women underwent abortions last year, 20 % of them under the age of 18.

Even the President, Vladimir Putin, is alarmed and he tried to warn the nation about the economic disaster facing Russia if there isn't a quick and dramatic turn around in the birth rate. For instance, pensioners now outnumber Russians 18 or younger for the first time in Russia's history. For a country already battling poverty, this situation is one full of dread.
Posted by DH at 11:49 AM