A Time to be Thankful - To God 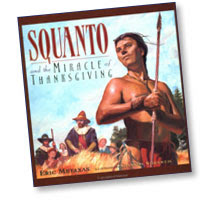 Thanksgiving is uniquely American. There are of course regional twists to the holiday. Ours consists of fried turkey, cornbread dressing, sweet potato crunch and my favorite - sweet potato pie. It is a time for families to gather together in prayer around the table. As you join with family and friends, take time and reflect on that first Thanksgiving. William Bradford, Governor of Plymouth, proclaimed the first official day of Thanksgiving in October of 1621. What were they thankful for? One year after arriving, the Pilgrims stood at about half their original number. Not quite one year earlier they had arrived in New England from Holland after a 66-day journey across the North Atlantic. During that first winter 47 of the 102 Pilgrims were lost to disease and starvation. If it hadn't been for Squanto, the young Patuxent Indian, the second winter might have claimed them all. Squanto had been taken captive by slave traders, but monks in Spain purchased his freedom and taught him the Christian faith. He made his way to England, learned our language, and thence returned to America. He was there to welcome the Pilgrims shortly after their arrival. Squanto taught them how to plant corn in New England's rocky soil. He shared his special knowledge of forests and rivers. Governor Bradford said Squanto had been sent by God to be the little band's Joseph.

We trace not only our Christian heritage to this brave band of Pilgrims, but also our country's solid foundation of self-government. The Mayflower Compact was signed even before the Pilgrims landed. It laid out the ideals of government by consent of the governed and made clear their purpose, "undertaken for the Glory of God, and Advancement of the Christian Faith." Plymouth Rock is the place where those Pilgrims first set foot on America's shores. The great French political scientist Alexis de Tocqueville wrote about this scene. In his classic 1835 book, Democracy in America:

This rock has become an object of veneration in the United States...Does this not show very clearly that the power and greatness of man is wholly in his soul? Here is the stone that the feet of some miserable persons touched for an instant, and this stone becomes celebrated; it attracts the regard of a great people; they venerate its remnants; they parcel out its dust in the distance. What has become of the thresholds of so many palaces? Who cares about them?

Tocqueville was one of the first Europeans to recognize the change that was taking place "in the course of human events" in America. He wrote that religious freedom was the key to understanding democracy in America. Today, there are those who think that religion and democracy are at odds with one another. Tocqueville knew that a firm foundation of faith was essential to the rise of democracy.

Family Research Council is dedicated to the defense of faith, family and freedom. Today, more than ever, that cause is grounded on the solid rock of God's grace. One final note as your family assembles on this Thanksgiving Day. Literally tens of thousands of Americans are serving our country in the U.S. military who will not be with their families. They are fighting for freedom or standing watch over our liberties. Their thanksgiving dinner may be eaten in a tent, in a tank, on board an aircraft carrier, or even in a military hospital. Let's be sure to thank God for them, especially, on this day.