A Few Days in Florida 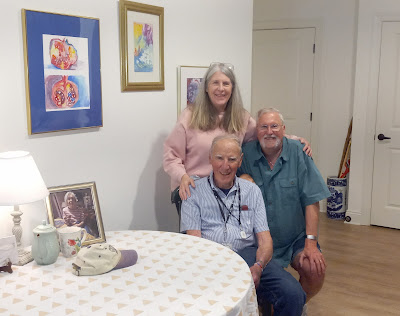 On last night’s flights home from Florida, I wrote the April LifeSharer letter and, though a part of that letter concerned Carol Coppi’s memorial service in Destin last Friday, I thought I’d share a brief report of our whole trip here.

After spending 4 glorious days of reunion with Quint down in Florida, Carol suffered a second severe stroke and died just hours later. Quint asked me to come down and conduct Carol’s homecoming celebration and, of course, I was honored to say yes.  But with Destin being a popular spring break site and with Biden’s policies driving fuel alarming high, the best flight Claire could obtain was long, expensive, and convoluted one that included flying via New York City and Charlotte. Oh my. We got to the Omaha airport at 6 AM and arrived in Destin just before 7 PM. 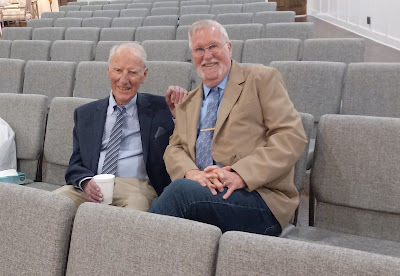 Quint’s son Steve and daughter-in-law Renee had arranged very nice accommodations at a condo near Miramar Beach for 4 nights for members of the family. We were also graciously invited to stay there as well. That first night we were able to spend only a short time with Quint, but we caught up more substantially with a Friday morning breakfast at Quint's favorite, Waffle House. Claire and I then took a break by visiting the beach, having prayers together, and me wading into the Gulf.  Friday afternoon was the funeral ceremony which included a remarkable photo collage, my brief eulogy and sermon, very moving tributes from members of the family, and a lovely supper at which more heartwarming memories of Carol were shared. 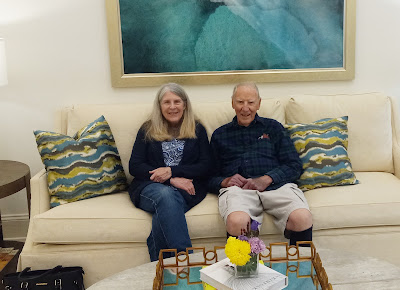 Saturday morning we awoke to quite a thunderstorm yet still made it out for another breakfast with Quint, this time at The Blake, the beautiful assisted living facility which is now his home.  We also toured the place, talked with several of his neighbors, and even shot a little pool.  We then took Quint back to Steve’s house for a rest. Claire and I had a picnic on the beach where we enjoyed watching the waves, parasailers, and even a few dolphins. 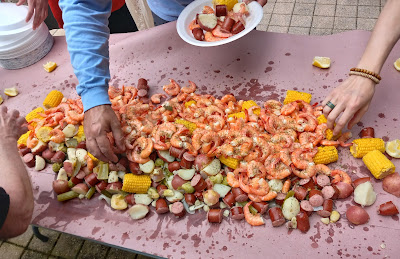 Saturday's big family event, however, came later on Saturday with Steve’s friend
Doug creating an elaborate and delicious “shrimp boil.”  Potatoes, cobs of corn, Brussels sprouts, celery, sausage, and big shrimp boiled up with heavy Cajun spices in a big pot over a fire and eventually spread out on butcher paper to be consumed with one’s hands.  It was a great time. Claire and I sat with Quint and Denise, a good friend of the family, and we talked a lot of memories and a lot about heaven's rewards. 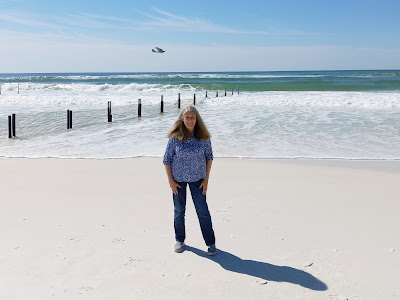 I had found a Panera nearby and so a 6 Sunday morning I was there having coffee and doing Vital Signs work. Claire slept in a little later before getting to her journal, laundry, and ironing.  We then had breakfast together at a First Watch restaurant before dressing down and enjoying an hour of a brisk prayer walk along the beach.  Later on Claire and I took Quint out to dinner at a fantastic Irish pub-style restaurant (McGuire's) which includes in its decor $2.2 million in dollar bills which customers sign and staple onto the walls, booths, just about anywhere.  What a sweet, memorable, and delicious evening. 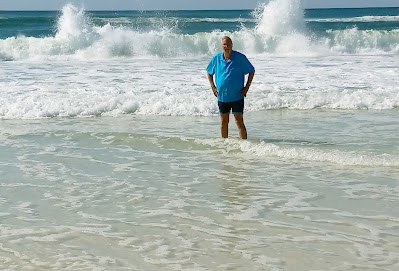 And finally Monday came round.  I started early again at Panera while Claire packed our things. By 8 we were over at Quint’s new place to help 3 of his family members get his apartment ready to live in.  We invested about 3 hours in that project before taking off to bring Quint over. We had lunch there at The Blake with him and Ruth (another resident) as the family finished preparing the apartment. And with that task accomplished and a little more conversation, we said our goodbyes and headed for the airport. We thank all of you who prayed for us, for God’s truths to be shared at Carol’s memorial service, and for Quint and his family. If you would like Quint's new contact information, please let us know.
Posted by DH at 1:56 PM