Living in the Big Tech World 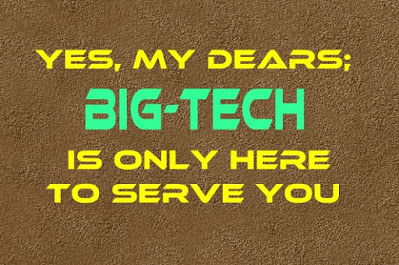 Oh my; the curtains have been pulled aside completely and the world is seeing just how sneaky and sinister are Facebook's designs on the culture.  Just take your pick of evils.  For instance, there’s Facebook’s attempt to control the flow of thought with its highly sophisticated but increasingly transparent totalitarian vision.  Freedom and fair play? They don't even try and hide their disdain for those virtues anymore.

Then there is their ham-handed censorship of those political, religious, and social views that are contrary to those pushed by Big Brother. Facebook frequently limits the spread of posts that present contrary views and sometimes "lose" them altogether. Even when such posts are allowed, Facebook is increasingly requiring that they are linked to their own ideas of "corrective" explanations.

And, of course, they are plugged into all the other leftist tech giants (Twitter, Google, YouTube, Wikipedia) in tracking, restraining, exploiting, and manipulating you.

So, what to do about it?

1) Though we know Vital Signs Ministries' Facebook and You Tube posts are at the mercy of Big Tech's prejudices and powers, we will, for now, continue on those platforms with hopes (and no small amount of prayers) that some of them will break through and still connect with people. We will also do so with some of our personal posts.

2) However, like several of our friends have already done, we are going to experiment with other platforms like Parler.

3) We will be urging our friends to start bypassing the social networks and instead go directly to Vital Signs Ministries through our website and blogs...and do the same with other terrific sources of news and commentary.

In this regard I recently answered a question posed by several friends who were bothered about the flood of fake news (from both old guard media and the Big Tech information platforms). They asked me how I keep up with cultural happenings without being overwhelmed by conflicting claims. My answer began with the need to keep one's priorities in place; namely, to live a life for God that centers on knowing the Word, walking in holiness, exercising spiritual disciplines, serving others, and always yearning for the upward call. However, in the specific matter of dealing with the day's news and views, I listed for them the internet sites I most frequent. Here is that part of my note to them.

* The first thing I look at in the morning is the email devotional we get from Joni Eareckson Tada. It's terrific. You can check out samples of that and even sign up for it right here.

The other sites I check in with almost daily?

Others that I frequently find enlightening and helpful are those that send me email updates. No, I don't always open them up. Like you, I've got a lot to do and many days there just isn't time to pursue them. But are they valued sources? Most certainly.  And I recommend them all highly. Those would include Daybreak Insider; Daily Signal (from Heritage Foundation); Live Action; Family Research Council; Bright (which comes through the Federalist); Town Hall; LifeNews.com; and a few others.

In fact, you will occasionally find compilation posts over on Vital Signs Blog that utilize these sources and more. Here's a couple of examples of such posts:

Did You Catch These?

But please do not overlook this next important part of our living in this "brave new world." It is this. 4) Going really old school by replacing time spent in "social media" for genuine social interaction. And what does that mean? Letters and cards. Phone calls. In person visits. Coffee or tea conversations. Meals together. Bible study and prayer meetings. Doing physical activities together. Even utilizing newer technologies like Zoom for real conversations.

Actually connecting with people? Who knows? It might just catch on!

Yes, Virginia. Despite Big Brother's best efforts to herd you into the corral, you can live life informed, engaged, purposeful, and free. But it will take a little effort.