Back to the Top: Climbing Republic Mountain 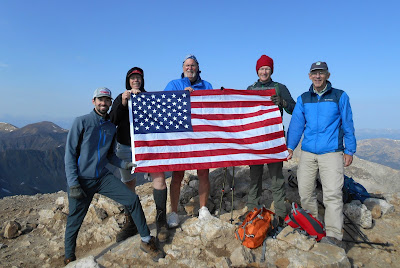 When I was coming up to my 65th birthday, I decided to celebrate a little differently; namely, by attempting a hike of one of the 14ers back in my home state of Colorado. (The 14er label comes from being at least 14,000 feet in elevation.) And, you guessed it; that turned out to be the most harrowing, difficult birthday I ever had! But, thank the Lord for His enabling mercies, I made it to the summit of Mt. Bierstadt (14,065) and really relished the achievement. I followed up with another birthday hike the next year, making it up Mt. Quandary (14,265).

The recap and photos from those two adventures are 1) here  and 2) here.

However, the next year I was unable to keep up this new tradition because of both a torn meniscus and torn calf muscle. Those and other physical issues also kept me off the mountains for both my 68th and 69th birthdays (the latter coming just 8 weeks ago). Alas, it looked like I was forever done with that particular activity. 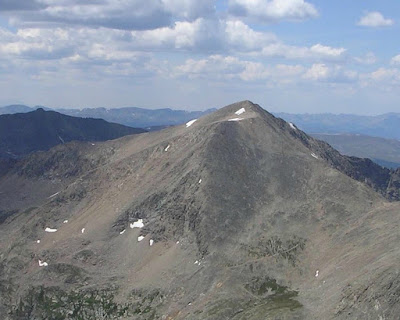 But, thank the Lord, He gave me another chance last Wednesday and despite the wildfires, the ongoing physical difficulties, a sleepless night before (stretched out in my car while a cold rain fell), and certainly the toughest climb yet, I was blessed to accompany 4 friends (Ron Scheffler, Mark Fichter, Sterling Fichter, and Ryan Dinville) to the top of Mt. Democrat (14,148) or, to use the historic name, Republic Mountain. (Note: The Mount Democrat moniker began with miners with Confederate sympathies who despised that a nearby peak had become known as Mount Lincoln. As one chronicler put it, they changed the name of Republic Mountain to Mount Democrat "to even the scales.")

Anyhow, here's a few photos and comments about the climb. 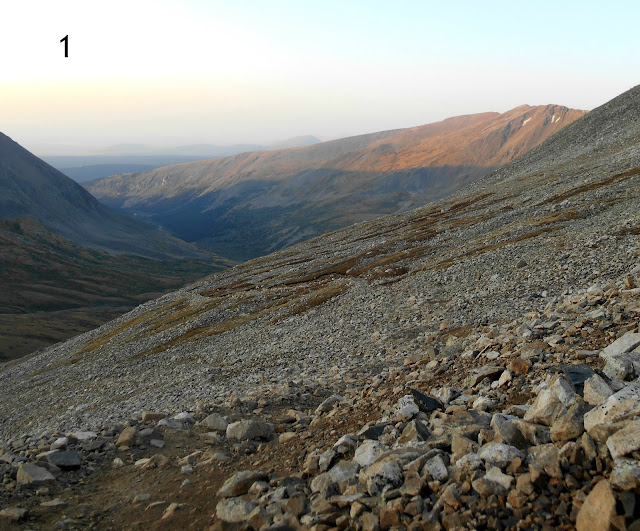 1) After enduring a lot of rain and cold while camping out on Tuesday night at the Kite Lake Trailhead, we started out about 5:10. Using flashlights, we headed north towards the saddle between Republic (Democrat) and Cameron.  This photo, taken after about 90 minutes of hiking, looks back southwest towards camp. 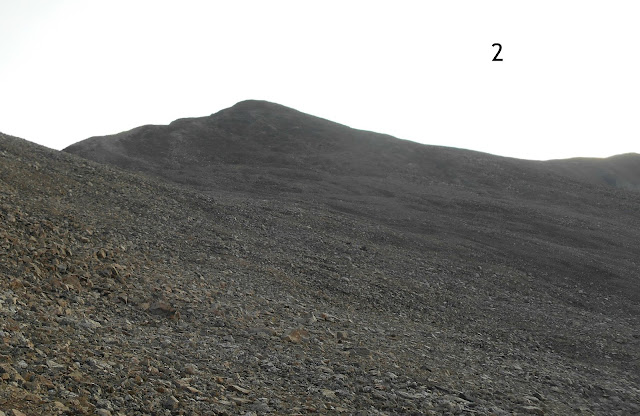 2) This is the goal...well, kind of. This far view of the mountain we will be directly climbing in about an hour (from this spot) actually shows the "false summit" of the mountain. This means that the true peak is hidden and you've got to go find it! 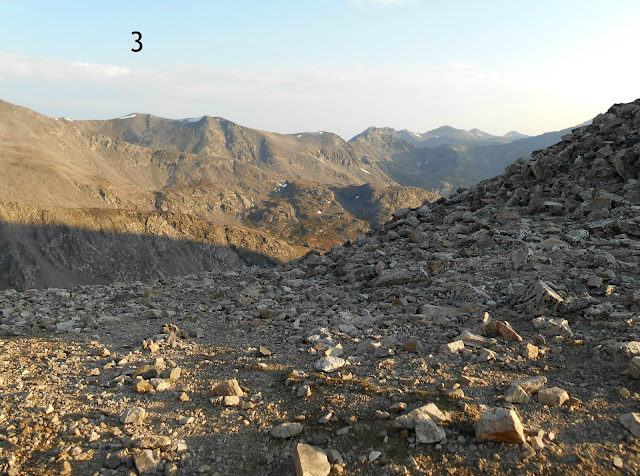 3) At the saddle between Republic and Cameron. My camera here is pointed almost directly north. Below is the valley in which the Middle Fork of the South Platte begins and in the background you can see Bartlett, Wheeler, North Star, and other impressive peaks. 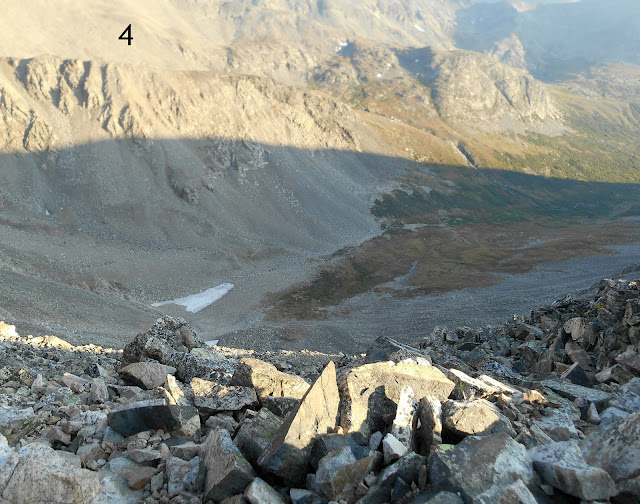 4) This shot looks a bit further over the edge (no small test for a fellow who deals with vertigo) towards the valley floor. That shadow is thrown by Mount Cameron. 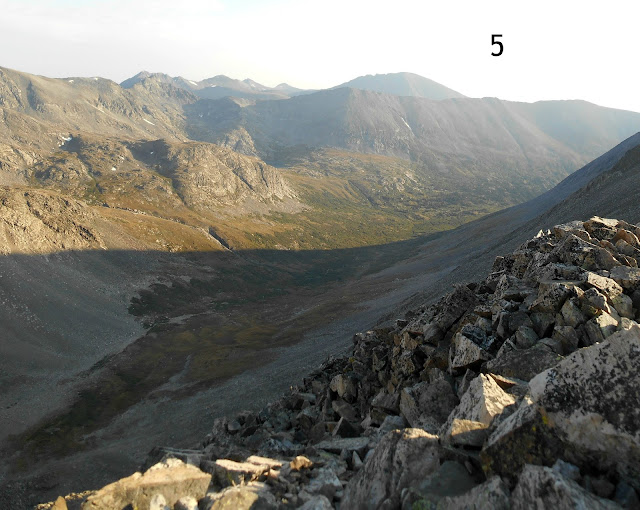 5) From the same vantage point, this photo shows how the valley breaks to the east. I love the contrast you find in the mountains of light and shadow, angle and curve, beauty and bleakness. By the way, the rounded mountain shown on the far horizon is Mount Quandary. 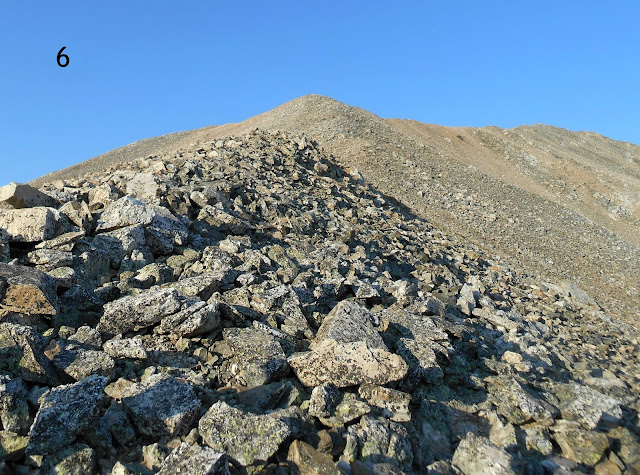 6) Okay, this is the first pitch towards the west and up from the saddle. If it looks intimidating, that's because it is! Indeed, not only must the hiker deal with the steep ascent in this portion, he or she must also scramble their way around with literally no path to guide them for quite awhile. One can sometimes find a few cairns to provide general guidance on the way back to some kind of trail. But, even then, this part of the climb is pretty frustrating, slow going, and a bit dangerous. So, be careful, kids. 7) Looking back toward the saddle and the ascent towards Cameron, this point in the trail represents a much-welcomed break from the scrambling. For quite a ways now, the hiker will be gingerly moving up several switchbacks on his way to the false summit. 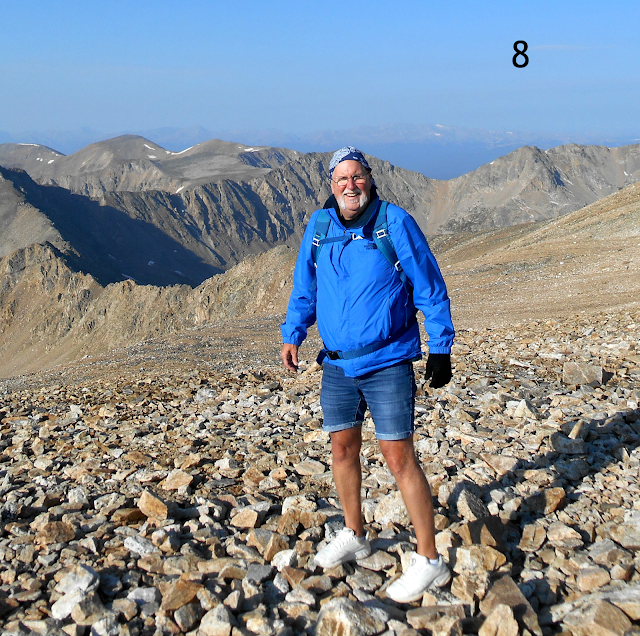 8) At the broad plain beyond the false summit, there's still a ways to go. But this makes a great place to rest for a few minutes, take in the grand views to the west and southwest (which includes Mount Arkansas), and psyche up for the remaining 20 minutes or so. 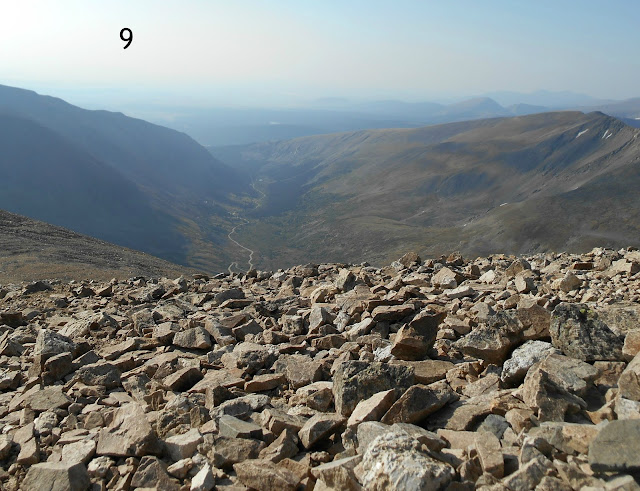 9) From the same vantage point, this photo looks south towards the area where we started the morning. The light ribbon you can see moving down the Kite River Valley is the hardscrabble road that one takes (preferably, in a tough, high-clearance vehicle) from Alma 6.5 miles to the trailhead. 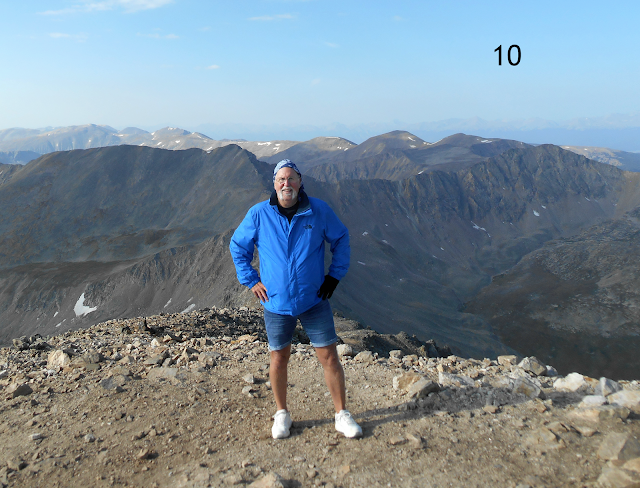 10) Arriving at the summit, all of us exchanged cameras to get both individual and group photos...plus the ones in which we posed with a 5-foot flag I had brought along. We took pictures for others who were there and one couple eagerly took advantage of our general offer to use our U.S. flag.

And I'll post below again the photo that leads this story. It is surely one of my favorites from all my mountain photos from over the years. On the left (as you look at the photo) is Ryan Dinville (a family friend of the Fichters who now is a student living in Denver with obligations to the U.S. Air Force -- Ryan is an eager and skilled hiker and an overall nice guy); Mark Fichter (a recently retired farmer from southwest Iowa who now lives with his wife, Benita, in Bellevue -- Mark is a leader in his church and has long been a pro-life colleague), me; Sterling Fichter (Mark's oldest son who now farms on his dad's land -- Sterling is an experienced hiker with 11 14ers on his record so far -- and he is a toughened historical reeanactor whose specialty is the American mountain man era); and Ron Scheffler (a longtime friend and supporter of Vital Signs Ministries, Ron is married to Linda who was spending time with Claire in Breckenridge and Frisco during our absence -- this was Ron's 2nd 14er and he did remarkably well.) 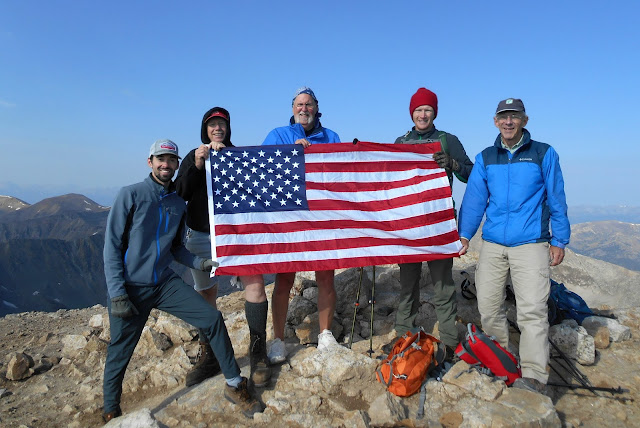