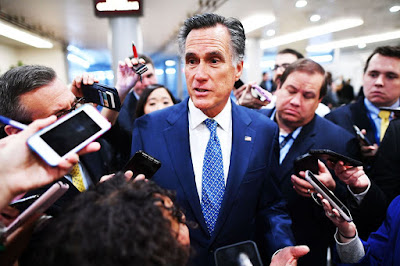 Okay, Senator Romney, just last week you were insisting that more witnesses were needed for President Trump's impeachment. You wanted more information, more testimony, more evidence to see if an impeachable offense had, in fact, been perpetrated.

But now, without that evidence forthcoming, you decide Trump is guilty. I guess the facts didn't really matter to you after all, did they?

No, you can't have it both ways, Mr. Senator. Well, unless you don't mind underscoring for the public once again that you are not a man of reason, not a man of principle, not a man who takes justice (or even truth) at all seriously.

You know, Senator, I haven't done any thinking about you since you lied your way through a weak field in 2007 to secure the Republican nomination for the presidential election. You made it -- but only to then to fabricate, fritter, fumble, and faintheartedly furnish to Barack Obama all he needed to take the prize.

But just to make sure my memories served me correctly about you, Mr. Senator, I just scanned through Vital Signs Blog posts from 2007.  Here are titles to just a few of those posts with, in a few instances, a blurb from the contents.

At a speech in Davie Monday hosted by the conservative Federalist Society, Republican presidential contender Mitt Romney defended passing over GOP lawyers for judicial appointments when he was governor of Massachusetts.

Of the 36 lawyers Romney nominated, 23 were registered Democrats or independents who donated to Democratic candidates or voted in Democratic primaries, according to a Boston Globe analysis that was circulated by rival Fred Thompson. Two appointees supported expanding gay rights.

'Romney's clear affinity for liberal activist Democrats on the bench in Massachusetts doesn't match well with the Federalist Society's belief in judges who `say what the law is, not what it should be,' '' Thompson spokesman Jeff Sadosky said in a written statement....

...The first unusual step Romney took was in bringing up (on his own) the fact that until 1978 the Latter Day Saints excluded blacks from becoming priests. He spoke of how he had to pull his car over to the side of the road to weep with gratitude when he heard the news on his radio.

That anecdote, of course, presents Romney as a man of proper sentiments. But sentiment alone doesn't make for a good president. Intelligence, discernment and courage count too. And, on that score, Romney's story simply reminded Americans that his "inner feelings" about racial equality were never strong enough to cause him to break from (or evenly openly criticize) his discriminatory religion. And, by the way, when this event happened, Romney wasn't just a dutiful, impressionable kid in a Mormon home. He was 30 years old, a graduate from a joint JD/MBA program coordinated between Harvard Law School and Harvard Business School, and a vice president of Bain & Company, Inc., a management-consulting firm based in Boston.

Again, it wasn't the best moment for Romney to recall...

"He of the Long Nose? Mitt Romney's Troubling Exaggerations"

The mainstream media is celebrating Mitt Romney's 8-vote win in Iowa. But that's no surprise; they have preferred him from the very start.

Because Mitt Romney will be the easiest candidate for Barack Obama to beat come next November.

"Mitt Romney Gives How Much to Mormonism?"

With those Mitt Romney tax returns finally made public, we learn that he and his wife donated a total of $8.73 million to the Mormon religion -- over just the last two years.

"It's That One Extra Step That Causes Him The Trouble": CBS Highlights Romney's Exaggerations

"Obama's Sex Ed Ideas Are Foolish...But is Romney the Right One to Criticize?

Romney may have never heard that because Massachusetts -- the state where he served as governor from 2003 to 2007 -- has a decidedly progressive sex education curriculum. Under the state's non-binding framework, school districts can begin working towards the state's sex education goals as early as pre-kindergarten.

By the end of the fifth grade, it not only encourages schools to teach children the basics about puberty and the reproductive system, it also encourages them to know how to define "sexual orientation using the correct terminology (such as heterosexual, and gay and lesbian)." Before the end of fifth grade, the Massachusetts framework also aims to teach children about inappropriate touching.

While Romney had absolutely nothing to do with the development of the state's sex education curriculum, which was put into place more than three years before he became governor, Romney senior advisor Eric Fehrnstrom confirmed to ABC News that Romney did not take any efforts to undo it either...