The Great Britain Adventure: Catching Up 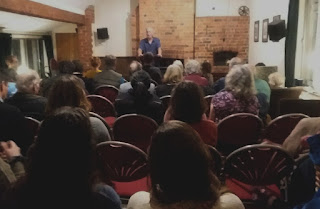 Okay, it's been several days since I've checked in with a report on our activities here in Great Britain but, believe me, it's a difficult task given our schedule (a quite hectic one which includes a lot of moving about) and the inconsistency of internet connections. Anyhow, it's early morning in Broadbottom, Cheshire and I'm online, ready to write a brief catch-up.

We are very much enjoying the gorgeous home and generous hospitality of Jonathan & Allison Fewster all this week and, because we have far fewer meetings, speaking engagements, and "When Swing Was King" shows this week than last, we are able to have a lot of stimulating conversations with our hosts. But, before I mention the tasks coming up in the next few days, let me quickly review what's been happening since my last post.

Our time in Cambridge? Well, we had the most interesting (and comfortable) accommodations in the West Court in Jesus College (part of Cambridge University) where we enjoyed an elegant but rather rigid breakfast procedure in the dining hall all three mornings we were there. The town itself was intriguing, beautiful, full of history, and full of bicycles!  Our "work" here (besides a lot of personal discussions with Christian friends) also included an evening with young pro-life colleagues at the Round Church, a talk to about 100 high school kids at an assembly, and an address about pro-life apologetics to a gathering of local Christian ministers, academics, and Cambridge students. In between, Greg took us to Blectchley Park (the WWII codebreakers site) and the American National Cemetery just outside Cambridge. And a very moving highlight of that experience was that I was  allowed to fold the American flag after it had been lowered at dusk. Wow.

On Friday we drove south, skirted London, and made it to the little village of Greatham and the Manor House which serves as the headquarters of the English L'Abri. We had rain all through the trip and it was raining still when we got there. The old place was cold but the tea and fellowship of the staff soon warmed us a bit. L'Abri was full up this time around with many more visitors than we had seen in previous trips there. That made for a lot of interesting conversations with people from Britain, Australia, Germany, Ireland, Switzerland, Brazil, the United Sates, Romania, and more. Supper was simple fare but lively discussions and we volunteered to help with dishes afterwards. That duty almost made me late for the evening's lecture which was especially embarrassing because I was the speaker!

The topics covered in the 45-minute lecture (and the 45-minutes of Q&A which followed) were Christian literature, the art of reading well, reading as co-creation, book clubs, specific authors, etc. We had a swell time and, after a quick breakfast the next morning, we were off north.

It was another drive through the rain all the way to Birmingham where we barely made it on the train. Whew. It was a rather exasperating beginning to an afternoon of adventure involving hauling luggage from platform to platform, train changes, crowded conditions, and finally figuring out a solution to a cancelled train. But we made it okay and only a little late.

Christine Fidler met us at the Hyde Central platform and we had tea (a full supper) at her house, enjoying very much a reunion with her kids -- who now have kids of their own! And after tea, we were taken to Jonathan and Allison's where we're snugly tucked in for the week.

One of the key events of our trip was figured to be the Big Night Out, an elaborate and intergenerational dinner/dance that Debs Fidler and her team created. And that's exactly what it proved to be because we were a part of that gala party last night. But our detailed report on that and the other parts of our final week here in the U.K. will be a featured element of the Vital Signs Ministries pie social coming up at Converge Church, Friday, November 8 at 7:00. We sure hope you'll be there. For details of what else the pie social holds, please check out my (or the Vital Signs Ministries) Facebook page.
Posted by DH at 3:13 AM