“Your Salvation Is Sealed” 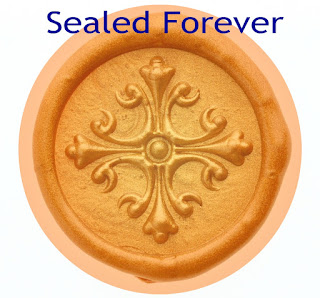 “In Him, you also, after listening to the message of truth, the gospel of your salvation —having also believed, you were sealed in Him with the Holy Spirit of promise, Who is given as a pledge of our inheritance, with a view to the redemption of God’s own possession, to the praise of His glory.”  (Ephesians 1:13-14)

Believing the gospel of salvation results in many supernatural and ongoing effects in a person’s life.  And one of the most glorious and comforting is the truth the apostle Paul describes in the verse quoted above; namely, that the Christian is sealed with the Holy Spirit to guarantee the ultimate redemption he will receive in heaven.  You see, the New Testament explains that when a person places his trust in Jesus Who died on the cross to pay the penalty of mankind’s sins, that sinner is forgiven – completely and forever.

And that salvation comes with three effects.  1) The person, at the very instant of his belief in Christ’s atoning death in his behalf, is saved from the penalty of sin.  That’s right; the judgment of God against sin no long rests on the sinner because it was poured out instead upon Jesus. This is the “substitutionary atonement” – Christ died in our place to pay the price of our sin. It is the aspect of salvation that is called justification.

2) The Christian can also be saved from the power of sin in his life for he has been “born again” and is a new creature, indwelled by the Holy Spirit Who gives the believer the ability to resist temptations and live in holiness. This is the aspect of salvation that is called sanctification.  And 3) The Christian will one day experience a salvation from the very presence of sin. The Christian who receives Christ as his Savior immediately experiences the first two effects of salvation. But the third effect will be realized when Christ receives His adopted child into His presence and ushers him into the heavenly home He has prepared for him. This is the aspect of salvation that is called glorification.

It is this third aspect of salvation that Paul highlights in the Ephesians 1:13-14 passage.  And he repeats the point later in verse 30 of Chapter 4: “Do not grieve the Holy Spirit of God by Whom you were sealed for the day of redemption.”  But these aren’t the only times Paul underscores how the destiny of the Christian has been sealed by the power of God.  For instance, he comforts the church members of Corinth (2 Corinthians 1:22) by reminding them that they are sealed, representing God’s pledge (literally, a down payment) on their heavenly inheritance.  Also, in 2 Timothy 2:19, Paul’s young protégé is exhorted to remember that God’s seal is not only related to a believer’s eternal standing but also to his present experience.  In that verse Timothy is told that the seal of God is a “firm foundation” reflecting not only God’s ownership and protection of His children but also the motive and empowerment for their holy living.

The basic Greek word translated “seal” in these instances is sphragis.  It is a word connected with ownership, security, authority, and permanency.  Therefore, its use by the apostle Paul is a dramatic illustration of how wonderfully secure is the believer’s position in Christ – fully forgiven, redeemed, empowered for holiness and service, and yes, guaranteed an entrance into God’s heaven. For, of course, the seal of God is unlike any earthly counterpart we can imagine. We’re not talking about Saran Wrap, Tupperware, or latex caulking here! Oh no; the gifts which God seals in us will never evaporate, never leak out, never be contaminated or weakened by a foreign substance, never lose power.  Our relationship with God including, of course, all three aspects of salvation (justification, sanctification, and glorification) can be thoroughly and joyfully depended upon. The deal is truly sealed.
Posted by DH at 5:53 PM