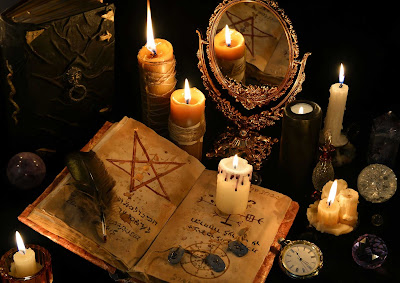 Way back on October 21, 2011 I posted on Vital Signs Blog this excerpt from Amity Shlaes’ article Halloween’s Pagan Themes Fill West’s Faith Vacuum published by Bloomberg. It remains relevant and enlightening and so I post it again.

(And yes, the whole article is still online right here.)

...But as much as we’d like it to be, Halloween isn’t secular. It is pagan. There’s nothing else to call a set of ceremonies in which people utter magical phrases, flirt with the night and evoke the dead. One of my family’s favorite Halloween props was a hand that moved, as though from the netherworld, when you reached to collect a few pieces of candy corn. Necromancy is a regular part of Halloween games. Zombie masks are one of this year’s top- sellers. As grouchy theologians used to point out, the origin of Halloween was most likely Samhain, an ancient Celtic holiday on which the dead, in some accounts, supposedly returned to visit.

There’s a reason for the pull of the pagan. In the U.S., we’ve been vigorously scrubbing our schools and other public spaces of traces of monotheistic religion for many decades now. Such scrubbing leaves a vacuum. The great self-deception of modern life is that nothing will be pulled into that vacuum. Half a century ago, the psychologist Carl Jung noted the heightened interest in UFOs, and concluded that the paranormal was “modern myth,” a replacement for religion.

Children or adults who today relish every detail of zombie culture or know every bit of wizarding minutiae are seeking something to believe in. That church, mosque and synagogue are so controversial that everyone prefers the paranormal as neutral ground is disconcerting. There’s something unsettling about the education of a child who comfortably enumerates the rules for surviving zombie apocalypse but finds it uncomfortable to enumerate the rules of his grandparents’ faith, if he knows them...
Posted by DH at 4:48 PM