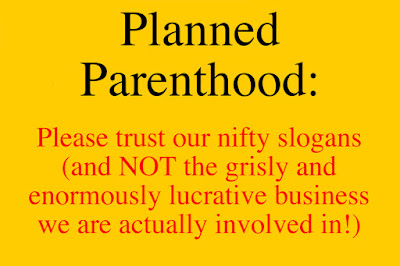 Last week I uploaded here a brief piece about the “lying signs” that adorn the Planned Parenthood abortion business here in Omaha. That post concerned the hypocrisy of Planned Parenthood’s claims to want the input of parents in their children’s decisions about sexual involvement. You can read it right here.

Here’s the sign for today, one that pictures a middle-aged woman with the caption, “Someone you know thinks she might feel a lump in her breast.” The passersby are, of course, led to believe that Planned Parenthood is a source of help for mammograms and other breast cancer screening.

But, contrary to that sign and contrary to the repeated claims from the press, the Democrats, and the mega-abortion corporation itself, it simply doesn’t provide this kind of help!

But don’t just take my word for it. Listen to Planned Parenthood staff themselves. That's the first clip. And then, use the link at the end of this post to hear the truth about Planned Parenthood and mammograms from, of all sources, the Barack Obama administration.

https://townhall.com/columnists/caseymattox/2012/09/07/obama-administration-planned-parenthood-does-not-perform-mammograms-n748379
Posted by DH at 5:30 PM