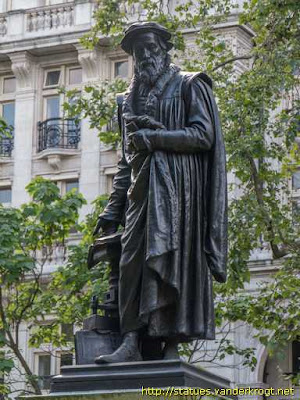 Erasmus, the great humanist scholar of the late Middle Ages performed one of the most important projects of his time when he published an entire Greek New Testament in a lucid translation which was true to the original manuscripts. Though himself a quiet and moderate man, a Catholic who had desires for only modest changes in the Church, his new translation would become a key spark for the Reformation throughout Europe.

In particular, a young priest and language scholar in England took Erasmus’ New Testament to his very heart. He was William Tyndale, a man who would later testify that he found Jesus Christ in that Greek New Testament and, depending upon Christ's mercy, Tyndale dedicated his life to producing the Holy Scriptures in the English language.

However, Tyndale’s great vision was opposed by strictly and ruthlessly applied laws prohibiting the translation of the Bible into the language of the people. Indeed, parents had been burned at the stake simply for teaching their children the English version of the Lord’s Prayer and the Ten Commandments.

But God honored William Tyndale’s noble desires and the brave, diligent, prayerful work it required to bring them to pass. The Bible was translated into English and disseminated throughout the country. And though Tyndale paid the ultimate price, being martyred by strangulation and burning in October 1536, he considered his life's work a wonderful investment for his eternity.

Extra note: The bronze statue shown here was created by J.E. Boehm in 1883. This bronze statue was placed in Whitehall Gardens on May 7th 1884 as part of the 80th anniversary of the British and Foreign Bible Society.

The Inscription on the front of the plinth reads...


William Tyndale
First translator of the New Testament into English from the Greek. Born A.D. 1484, died a martyr at Vilvorde in Belgium, A.D. 1536.

The last words of William Tyndale were “Lord! Open the King of England's eyes”. Within a year afterwards, a bible was placed in every parish church by the King's command.
Posted by DH at 5:58 AM