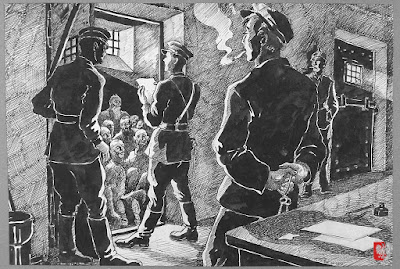 “The daughter of a former German diplomat in Moscow was trying to explain to me why her father, who, as an enlightened modern man, had been extremely pro-Communist, had since become an implacable anti-Communist. It was hard for her because, as an enlightened modern girl, she shared the Communist vision without being a Communist. But she loved her father and the irrationality of his defection embarrassed her. ‘He was immensely pro-Soviet,’ she said, ‘and then -- you’ll laugh at me, but you must not laugh at my father -- and then one night in Moscow, he heard screams. That’s all. Simply one night he heard screams.’

What Communist has not heard those screams? They come from husbands torn forever from their wives in midnight arrests. They come, muffled, from the execution cellars of the secret police, from the torture chambers of the Lubianka, from all the citadels of terror now stretching from Berlin to Canton. They come from those freight cars loaded with men, women and children, the enemies of the Communist State, locked in, packed in, left on remote sidings to freeze to death at night in the Russian winter. They come from minds driven mad by the horrors of mass starvation ordered and enforced as a policy for the Communist State. They come from the starved skeletons, worked to death, flogged to death (as an example to others) in the freezing filth of sub-arctic labor camps. They come from children whose parents are suddenly, inexplicably, taken away from them – parents they will never see again.

What Communist has not heard those screams?”