3 Big Mistakes the Enemy Made at Pearl Harbor 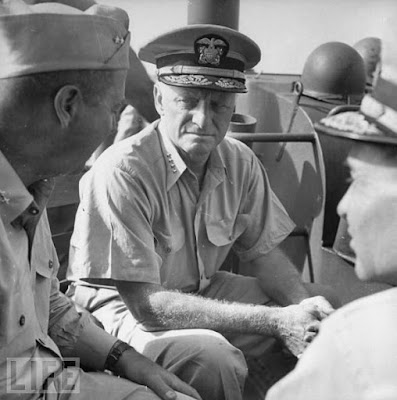 Here’s something I ran across while reading a copy of The Seahorse, the official newsletter of the U.S. Seagoing Marine Association that Dick Wilson sometimes passes along to me. The item concerned Admiral Chester Nimitz’s response to his initial review of the damage done following the attack on Pearl Harbor on December 7, 1941.

Admiral Chester Nimitz was attending a concert in Washington D.C. He was paged and told there was a phone call for him. When he answered the phone, it was President Franklin Delano Roosevelt on the phone. He told Admiral Nimitz that he (Nimitz) would now be the Commander of the Pacific Fleet. Admiral Nimitz flew to Hawaii to assume command of the Pacific Fleet. He landed at Pearl Harbor on Christmas Eve, 1941. There was such a spirit of despair, dejection and defeat — you would have thought the Japanese had already won the war.

On Christmas morning, Nimitz was given a boat tour of the destruction. Big sunken battleships and navy vessels cluttered the waters everywhere you looked. As the tour boat returned to dock, the young helmsman of the boat asked, ‘Well, Admiral, what do you think?’ Admiral Nimitz's reply surprised him. He said, ‘The enemy made three of the biggest mistakes an attack force could ever make. Either that or God was taking care of America. Which do you think it was?’ The young man had no answer. So Nimitz explained.

He said, ‘Mistake number one: The Japanese attacked on Sunday morning. Nine out of every ten crewmen of those ships were ashore on leave. If those same ships had been lured to sea and been sunk, we would have lost 38,000 men instead of 3,800.

Mistake number two: When the Japanese saw all those battleships lined in a row, they got so carried away sinking those battleships, they never once bombed our dry docks opposite those ships. If they had destroyed our dry docks, we would have had to tow everyone of those ships to America to be repaired. As it is now, the ships are in shallow water and can be raised. One tug can pull them over to the dry docks, and we can have them repaired and at sea by the time we could have towed them to America. And I already have crews ashore anxious to man those ships.

Mistake number three: Every drop of fuel in the Pacific theater of war is in top of the ground storage tanks five miles away over that hill. One attack plane could have strafed those tanks and destroyed our fuel supply. That's why I say the Japanese made three of the biggest mistakes an attack force could make or God was taking care of America.’

President Roosevelt had chosen the right man for the right job. We desperately needed a leader that could see silver linings in the midst of the clouds of dejection, despair, and defeat.”
Posted by DH at 1:00 PM