Solzhenitsyn on America's “Decline in Courage” 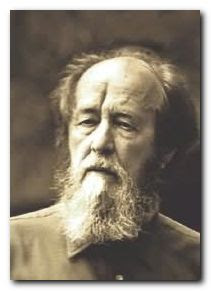 With the momentous happenings of last week; particularly the straightforward long overdue speech of President Trump to the United Nations, followed by the latest cave in of Washington politicians to Obamacare, Planned Parenthood, the leftist media, and even the rants of unhinged dictators in North Korea and Iran,  I recalled a particularly relevant  passage from Alexander Solzhenitsyn’s commencement speech at Harvard in 1978.

“A decline in courage may be the most striking feature which an outside observer notices in the West in our days. The Western world has lost its civil courage, both as a whole and separately, in each country, each government, each political party, and, of course, in the United Nations. Such a decline in courage is particularly noticeable among the ruling groups and the intellectual elite, causing an impression of loss of courage by the entire society. Of course, there are many courageous individuals, but they have no determining influence on public life.

Political and intellectual bureaucrats show depression, passivity, and perplexity in their actions and in their statements, and even more so in theoretical reflections to explain how realistic, reasonable, as well as intellectually and even morally worn it is to base state policies on weakness and cowardice. And decline in courage is ironically emphasized by occasional explosions of anger and inflexibility on the part of the same bureaucrats when dealing with weak governments and with countries not supported by anyone, or with currents which cannot offer any resistance. But they get tongue-tied and paralyzed when they deal with powerful governments and threatening forces, with aggressors and international terrorists.

Should one point out that from ancient times declining courage has been considered the beginning of the end?”
Posted by DH at 6:03 PM