The Images That Break Your Heart 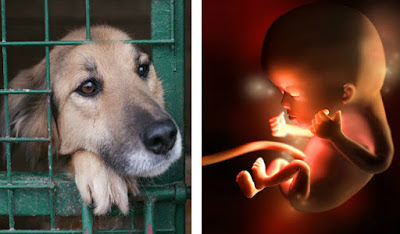 The video clips play on the television and you are strongly tempted to turn away because the topic is so tragic and the images so wrenchingly disturbing. But you watch and your heart is touched, your conscience informed and challenged. You are seeing into the eyes of the victims - innocent victims of man’s indifference, neglect, and even cruelty. The narrator urges you to take a good look at those in need and she then urges you to personally, immediately intervene to deliver them from further suffering, even from being destroyed out of a false sense of compassion.

The voice of the narrator, by the way, is a pleasant one for it belongs to a Hollywood celebrity. The sense of moral authority she portrays underscores for you how right and important it is to act in behalf of the innocent, to rescue them from danger.  You are told that you can make a huge difference, that you can be a hero and a lifesaver, and that your action will enrich and ennoble your soul.  The video clip is a powerful piece and you are not surprised that the television station plays it often, unafraid of any charges of controversy, offense, or political bias. After all, the message is a critically necessary one; it is a message that the whole culture must heed if it truly aspires to be moral and kind and compassionate.

The video clips I’m talking about, as you might not have guessed, are those created by the Society for the Protection of Animals, the Humane Society, and so on.  They are run free of charge by television stations under the banners of public service and charity.  They are applauded by progressives of all sorts.

And yet, these same progressives, these same public service committees, these same television stations categorically refuse any announcement that would apply the same methods, the same reasoning, or the same emotional triggers towards action that might save human boys and girls from the wicked cruelty of abortion. Does it make sense?  No.  Is it fair?  No.  Do the so-called progressives not see the horrible irony of treating the plight of animals in shelters to be a greater moral responsibility than the fate of human children scheduled to be torn to pieces or poisoned by abortionists? Sadly, the answer is again, no.

And thus goes the terrible devolution of American culture.

(Postscript -- I have no problems with appeals for kindness to animals. Indeed, men and women are presented with a biblical responsibility to show wisdom and compassion as they serve as God's stewards over all of creation. Remember, for instance, the Sabbath rest that God commanded extended to animals as well as men. My point is a simple but profound one; namely, that Western culture has got its priorities completely turned round. Our refusal to protect preborn children, while yet posing as kind-hearted, is irrational, ugly, and evil.)
Posted by DH at 8:21 AM