A Striking Testimony About Those Early Christians 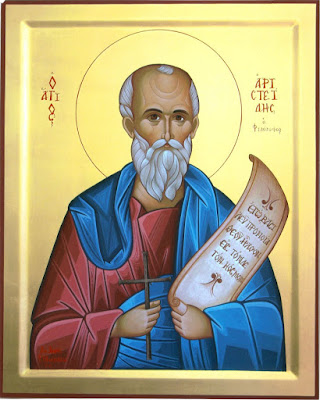 It is believed by many scholars that Aristides of Athens, the early 2nd Century philosopher who converted to Christianity and penned a striking description/apology of the Faith, dedicated that document to Hadrian, the Emperor of Rome, who though a non-Christian was nevertheless interested in history, culture, and humanistic values.

But whoever were his intended readers, Aristides presented a bold yet winsome argument that everyone (believer or not) would do well to honestly consider.

I print below a small section of the Apology, one that describes the lifestyle of early Christians as it regards the search for truth, virtues devoutly practiced, the attractiveness that a love of God produces, practical egalitarianism, deeds of mercy, and a confidence in a glorious life to come. Check it out.

XV. But the Christians, O King, while they went about and made search, have found the truth; and as we learned from their writings, they have come nearer to truth and genuine knowledge than the rest of the nations. For they know and trust in God, the Creator of heaven and of earth, in whom and from whom are all things, to whom there is no other god as companion, from whom they received commandments which they engraved upon their minds and observe in hope and expectation of the world which is to come.

Wherefore they do not commit adultery nor fornication, nor bear false witness, nor embezzle what is held in pledge, nor covet what is not theirs. They honor father and mother, and show kindness to those near to them; and whenever they are judges, they judge uprightly. They do not worship idols (made) in the image of man; and whatsoever they would not that others should do unto them, they do not to others; and of the food which is consecrated to idols they do not eat, for they are pure.

And their oppressors they appease (lit: comfort) and make them their friends; they do good to their enemies; and their women, O King, are pure as virgins, and their daughters are modest; and their men keep themselves from every unlawful union and from all uncleanness, in the hope of a recompense to come in the other world. Further, if one or other of them have bondmen and bondwomen or children, through love towards them they persuade them to become Christians, and when they have done so, they call them brethren without distinction.

They do not worship strange gods, and they go their way in all modesty and cheerfulness. Falsehood is not found among them; and they love one another, and from widows they do not turn away their esteem; and they deliver the orphan from him who treats him harshly. And he, who has, gives to him who has not, without boasting. And when they see a stranger, they take him in to their homes and rejoice over him as a very brother; for they do not call them brethren after the flesh, but brethren after the spirit and in God.

And whenever one of their poor passes from the world, each one of them according to his ability gives heed to him and carefully sees to his burial. And if they hear that one of their number is imprisoned or afflicted on account of the name of their Messiah, all of them anxiously minister to his necessity, and if it is possible to redeem him they set him free. And if there is among them any that is poor and needy, and if they have no spare food, they fast two or three days in order to supply to the needy their lack of food.

They observe the precepts of their Messiah with much care, living justly and soberly as the Lord their God commanded them. Every morning and every hour they give thanks and praise to God for His loving-kindnesses toward them; and for their food and their drink they offer thanksgiving to Him.

And if any righteous man among them passes from the world, they rejoice and offer thanks to God; and they escort his body as if he were setting out from one place to another near. And when a child has been born to one of them, they give thanks to God; and if moreover it happen to die in childhood, they give thanks to God the more, as for one who has passed through the world without sins. And further if they see that any one of them dies in his ungodliness or in his sins, for him they grieve bitterly, and sorrow as for one who goes to meet his doom.

But ideals that are clearly taught in Holy Scripture as eminently do-able when the believer denies his baser passions and attitudes and instead yields his heart to the control of the Holy Spirit.

So, let’s make sure we’re aiming at those ideals. Yes, confessing to God and others when we sin and fail, but getting back in the Spirit and moving on.

“Let your light shine before men in such a way that they may see your good works, and glorify your Father who is in heaven.” (Matthew 5:16, NASB)
Posted by DH at 12:12 PM