“The Man Who Tried to Kill Christmas” 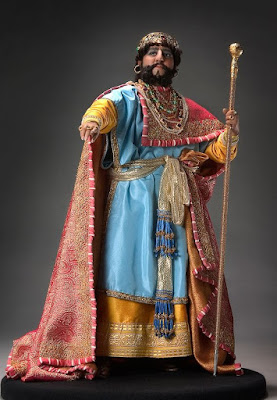 Certainly the coldest, cruelest personage in the Christmas story is Herod, the vicious tyrant whose political ambitions, fear, and hatred of righteousness resulted in the slaughter of Bethlehem's infants.  But how much do you really know about Herod?

Before the near-insanity of his last years on the throne, Herod had been a rising star in the Roman world.  Nearly four decades before Jesus was born, Herod had been given the title “King of the Jews” by the co-rulers of Rome, Octavian and Antony.  But the title was an optimistic one because Palestine was, at the time, under the control of the Parthians.  Herod was sent to re-conquer the area and after many tough years, he did so.  He was then given the throne (always under Rome's ultimate rule, of course) and he proved himself as clever and capable a politician as he was a warrior.

Herod was a visionary, building the port city of Caesarea and the fortress of Masada but he was also a pragmatist.  He built theaters and racetracks to please the populace; he melted down palace gold to feed people when a severe famine hit; and he married into the Hasmonean house, the ancient ruling family of the Jews.  However, it was Herod's ruthless ambition that was key to his nature.  To secure his wealth and power, Herod had hundreds of court officials and attendants executed; indeed, he even ordered the murders of his mother-in-law, his wife, and three of his sons.  In fact, knowing no one would mourn his death, he insured there would be mourning in Jerusalem by ordering several leading citizens to be executed on the day he died.

And, of course, after being alerted by the visiting Magi about the birth of the Messiah, Herod sought to protect his crown by putting to the sword all of the babies of the Bethlehem area.

Nevertheless, even Herod's pernicious power lust could not thwart the plan of God. The Holy Family was rescued from the clutches of this vicious killer, sent to Egypt for protection, and the plan of salvation for all who would believe in His Son went forward.

Oh yes, the Christmas story is one of deliverance...in more ways than one.
Posted by DH at 7:57 AM