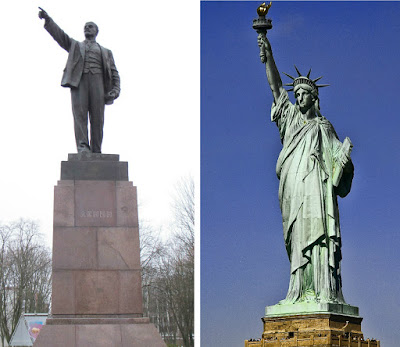 My longtime friend, Hleb Yermakou is a Belarusian Christian who serves the Lord as a translator, guide, and advisor with Encouragement International as well as pastoring a congregation in Portugal composed primarily of Ukrainian emigres. He sends along a few observations relevant to the historic ideals of liberty in American culture.

Writes Hleb, “My ministry with Encouragement International takes me to various places in Europe where I help communicate between U.S. missionaries (and others from the West) and the local people. This past August, for instance, I escorted a group from Arizona helping on a church construction project in a Belarusian city. Taking a tour around the city, the Americans found a statue of Lenin, the Communist leader who was almost worshipped during the old Soviet times. Some of them were surprised. I explained that nearly every little town still has a statue of Lenin in the very center, usually next to the city government building. And, sure enough, the Americans wanted to take a picture of themselves next to the statue of Vladimir Lenin.

The next morning the team leader’s daughter saw one of the pictures posted on Facebook and suggested how illustrative of the Christian mission it was to show a picture of missionaries next to the statue of a Communist dictator. Her comments got me to thinking about the power of symbolic structures. I realized that when we Belarusians (or other Eastern Europeans) travel in Western Europe, we desire to have our photos taken next to the Eiffel Tower in Paris, the Colosseum in Rome, and the Bundestag in Berlin. But when we are blessed to travel to the United States, our fondest wish is to commemorate our trip to the center of democracy, freedom, and the rule of law by having our photos taken with the New York City’s Statue of Liberty in the background.  For so many people throughout the whole world, that grand and beautiful statue is the symbol of America, something that stands for so much more than history, more than an architectural achievement, more than the fame of a politician or military hero.

Indeed, the Statue of Liberty has long represented to the world their most cherished hopes: justice, religious and political freedom, and opportunity.

I wonder…do Americans themselves still see this in their national symbol? And do they still feel the passion for the ideals she has long represented to the whole world?”