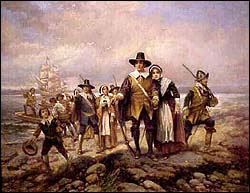 The following is an informative, stimulating article written by the late Barbara Curtis, author, blogger, pro-life activist, and mother of nine. I frequently linked to her essays in past years and this one, posted on Vital Signs Blog 5 years ago, is certainly appropriate.

Ever hear the story about the young bride who caused a stir when her new husband found her preparing their first Thanksgiving turkey by cutting it in half?

"That's how Mama always did it," she said.

"That's how Grandma always did it," Mama said.

So they called Grandma. Grandma couldn't remember why they cut the turkey in half. She thought back over all the past Thanksgivings. She remembered the turkeys her mother had heaved out of the wide old-fashioned oven in their cozy kitchen. Her mother had never cut the turkey in half. But for at least 40 years, she and her children--and now grandchildren--had been cutting their turkeys in half. When had they decided it was better that way? Her mind kept going back to her mother's kitchen . . . it was the oven! The first years of her marriage her own oven was too small to accommodate a whole turkey.

Sometimes I wonder if our Thanksgiving turkey has been cut in half. In the oven of multiculturalism, there has been less room for the complete story of our nation's heritage. It's just not acceptable to emphasize the role of faith in the first Thanksgiving. Yet that's what it was all about. The faith of the first Thanksgiving celebrants was as real as the bowls and baskets of food they prepared, as up close and personal as the events that had led them to this moment, as compelling as their pursuit of religious freedom.

Thanksgiving in a Nutshell

The story of the first Thanksgiving begins in 1608, when a group of people called the Separatists, persecuted for forming a church apart from the Church of England, left their homeland to settle in Leyden, Holland. There they found religious freedom but also poverty, grueling work and a secular culture that threatened to undo the values they had carefully instilled in their children. After seeking God's guidance, under the leadership of William Bradford they sold everything and, to finance their journey, indentured themselves to an English company for their first seven years in America. On the Mayflower, the Separatists joined others seeking the new land for other reasons; these they called the Strangers. These two groups, a passenger list of 102, together were the Pilgrims.

The journey lasted nine weeks, with the ship finally losing its course. Instead of reaching Virginia, they landed at Cape Cod, Mass. Now outside the territory covered by the King's Charter, the Pilgrims were responsible for their own government. After much prayer, the Pilgrims wrote a set of laws - called The Mayflower Compact. Only after it was signed, on Nov. 11, 1620, did they leave the ship to begin their new life at the place they named Plymouth.

Half the Pilgrims died that first winter. Yet the survivors clung to their faith in God, and when the Mayflower returned to England the next spring, pilgrims.gifnot one Pilgrim chose to return. That spring the little colony literally put down roots with the help of Squanto, an Indian who years before had been kidnapped and taken to England, where he had learned English and become a Christian. Squanto taught them how to grow corn, use fertilizer, stalk deer and catch fish. William Bradford, the governor, wrote of Squanto that he was "a special instrument sent of God for their good beyond their expectations."

The first harvest brought plenty. In October, Gov. Bradford set aside a day for everyone to thank God for meeting their needs through that arduous year. Squanto, his chief, Massasoit, and other members of his tribe were their invited guests. The Indians brought deer and turkeys, while the Pilgrim women cooked vegetables and fruit pies.

Which one of us in these far too comfortable times could imagine freezing and starving through a harsh winter, losing half of our community, then lifting such joyous celebration to God? What an inspiring picture of our Christian faith.

Unfortunately, this picture is lost in the watered-down versions of Thanksgiving that pass the tests of political correctness, including those offered in recently published books and encyclopedias. In some public school classrooms, children are taught that the Pilgrims offered the first Thanksgiving to thank the Indians, or worse yet, Mother Earth.

In many ways, our situation as Christians is drawing closer each year to that of the English Separatists. As the Church of England at the time disregarded biblical truths, our nation is no longer acknowledging its spiritual history. We can't ignore our personal responsibility to transmit our cultural heritage to the next generation. It's a responsibility with many rewards.

Sharing our country's heritage will inspire and give meaning to your children's lives, enriching the legacy of your own family as well as that of our nation. But you need to know that heritage well to pass it on. Check your library for books and encyclopedias published before 1970 to find the authentic history of our nation, as well as the inseparable role of faith in our history.

"America was born a Christian nation. America was born to exemplify that devotion to the elements of righteousness which are derived from the revelations of Holy Scripture."

In short, America has always been a nation of faithful people. Now we need faith that the current reign of revisionist history will be followed by a remembrance of our authentic past. Until then it is our responsibility to see that our legacy is not forgotten.
Posted by DH at 8:15 AM