Teaching Evolution in Church? An Invitation from Jack Niewold. 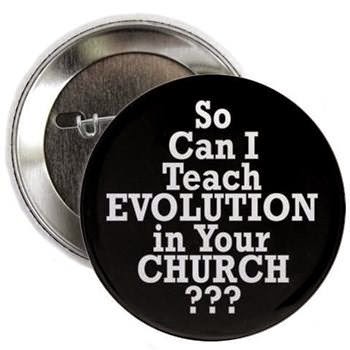 Jack Niewold, the author of Frail Web of Intention, has a provocative and perceptive answer to the question shown on the button at left. Check it out.

Actually, I've been looking for someone who can and will, but I haven't found anyone yet. It seems most teachers of science in public schools know very little about evolution. Yes, they all have an opinion about it, but few of them can state evolution in two or three brief propositions. They have an "attitude" toward evolution, but when it comes to either the actual evolutionary history of the earth or the theory itself, they are woefully unfit to teach it.

If anyone can find a teacher who can tell an adult Sunday School class what the theory of evolution is all about, and back it up with examples and specific historical and scientific evidence, I'd be all ears, so to speak.

On the other hand I know quite a few young-earth and old-earth Creationists who have evolution down cold. You'd want to be well-prepared when you take them on, or you'd get flamed by their take on, say, the Cambrian explosion.

I know some really impressive intelligent design Christians too who would make mincemeat of many of the assumptions of evolutionists. They're conversant not just in biology, but in physics and chemistry.

We have on our side a number of people who've debated with the late Christopher Hitchens and won, like Dinesh D'Souza, and one, Ben Stein, who made Richard Dawkins out to be a fool.

Two of the world's preeminent philosophers, Alvin Plantinga and J. Budzisewski have proposed arguments for the existence of God that have yet to be logically refuted.

We even have a theistic evolutionist or two, like Dr. Francis Collins, the head of the genome project. He sees no conflict between belief in Jesus Christ and adherence to a kind of evolution under the direction of a personal God.

Though you'd be welcome, don't think you'd be coming into our church to teach children about evolution. You've already got them several hours a day. Adults can make children believe any number of things. You'd be here to teach other adults, and while we're courteous and epistemically humble, we aren't patsies. We know a faith system when we see it and would hold you to the science.

So let us know how this sounds. You get your people, and we'll get ours, and go at it.