What's ISIS Really About, What Does It Want, And What's To Be Done About It? 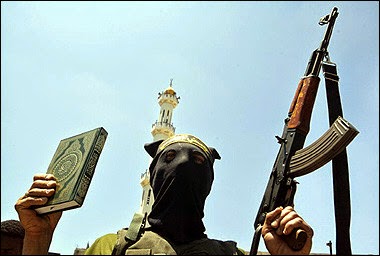 It’s a long, detailed piece. But it’s an important, fascinating one too — an eye-opening article that will season your conversations and motivate more frequent prayers. The article is “What ISIS Really Wants” and it’s written by Graeme Wood for The Atlantic.

The below title description of the piece is “The Islamic State is no mere collection of psychopaths. It is a religious group with carefully considered beliefs, among them that it is a key agent of the coming apocalypse. Here’s what that means for its strategy—and for how to stop it.”

I would heartily recommend reading the entire article. But knowing that many of you may not, I’m dropping several key paragraphs below.

-------
The reality is that the Islamic State is Islamic. Very Islamic…the religion preached by its most ardent followers derives from coherent and even learned interpretations of Islam. Virtually every major decision and law promulgated by the Islamic State adheres to what it calls, in its press and pronouncements, and on its billboards, license plates, stationery, and coins, “the Prophetic methodology,” which means following the prophecy and example of Muhammad, in punctilious detail.

-------
But Muslims who call the Islamic State un-Islamic are typically, as the Princeton scholar Bernard Haykel, the leading expert on the group’s theology, told me, “embarrassed and politically correct, with a cotton-candy view of their own religion” that neglects “what their religion has historically and legally required.” Many denials of the Islamic State’s religious nature, he said, are rooted in an “interfaith-Christian-nonsense tradition.”

-------
All Muslims acknowledge that Muhammad’s earliest conquests were not tidy affairs, and that the laws of war passed down in the Koran and in the narrations of the Prophet’s rule were calibrated to fit a turbulent and violent time. In Haykel’s estimation, the fighters of the Islamic State are authentic throwbacks to early Islam and are faithfully reproducing its norms of war. This behavior includes a number of practices that modern Muslims tend to prefer not to acknowledge as integral to their sacred texts. “Slavery, crucifixion, and beheadings are not something that freakish [jihadists] are cherry-picking from the medieval tradition,” Haykel said. Islamic State fighters “are smack in the middle of the medieval tradition and are bringing it wholesale into the present day.”

-------
Leaders of the Islamic State have taken emulation of Muhammad as strict duty, and have revived traditions that have been dormant for hundreds of years. “What’s striking about them is not just the literalism, but also the seriousness with which they read these texts,” Haykel said. “There is an assiduous, obsessive seriousness that Muslims don’t normally have.”

-------
After its battle in Dabiq, Cerantonio said, the caliphate will expand and sack Istanbul. Some believe it will then cover the entire Earth, but Cerantonio suggested its tide may never reach beyond the Bosporus. An anti-Messiah, known in Muslim apocalyptic literature as Dajjal, will come from the Khorasan region of eastern Iran and kill a vast number of the caliphate’s fighters, until just 5,000 remain, cornered in Jerusalem. Just as Dajjal prepares to finish them off, Jesus—the second-most-revered prophet in Islam—will return to Earth, spear Dajjal, and lead the Muslims to victory…

-------
In London, Choudary and his students provided detailed descriptions of how the Islamic State must conduct its foreign policy, now that it is a caliphate. It has already taken up what Islamic law refers to as “offensive jihad,” the forcible expansion into countries that are ruled by non-Muslims. “Hitherto, we were just defending ourselves,” Choudary said; without a caliphate, offensive jihad is an inapplicable concept. But the waging of war to expand the caliphate is an essential duty of the caliph.

-------
Choudary took pains to present the laws of war under which the Islamic State operates as policies of mercy rather than of brutality. He told me the state has an obligation to terrorize its enemies—a holy order to scare the shit out of them with beheadings and crucifixions and enslavement of women and children, because doing so hastens victory and avoids prolonged conflict.

-------
One way to un-cast the Islamic State’s spell over its adherents would be to overpower it militarily and occupy the parts of Syria and Iraq now under caliphate rule. Al‑Qaeda is ineradicable because it can survive, cockroach-like, by going underground. The Islamic State cannot. If it loses its grip on its territory in Syria and Iraq, it will cease to be a caliphate. Caliphates cannot exist as underground movements, because territorial authority is a requirement: take away its command of territory, and all those oaths of allegiance are no longer binding. Former pledges could of course continue to attack the West and behead their enemies, as freelancers. But the propaganda value of the caliphate would disappear, and with it the supposed religious duty to immigrate and serve it. If the United States were to invade, the Islamic State’s obsession with battle at Dabiq suggests that it might send vast resources there, as if in a conventional battle. If the state musters at Dabiq in full force, only to be routed, it might never recover.

And yet the risks of escalation are enormous. The biggest proponent of an American invasion is the Islamic State itself. The provocative videos, in which a black-hooded executioner addresses President Obama by name, are clearly made to draw America into the fight. An invasion would be a huge propaganda victory for jihadists worldwide: irrespective of whether they have given baya’a to the caliph, they all believe that the United States wants to embark on a modern-day Crusade and kill Muslims. Yet another invasion and occupation would confirm that suspicion, and bolster recruitment. Add the incompetence of our previous efforts as occupiers, and we have reason for reluctance. The rise of ISIS, after all, happened only because our previous occupation created space for Zarqawi and his followers. Who knows the consequences of another botched job?

-------
Given everything we know about the Islamic State, continuing to slowly bleed it, through air strikes and proxy warfare, appears the best of bad military options. Neither the Kurds nor the Shia will ever subdue and control the whole Sunni heartland of Syria and Iraq—they are hated there, and have no appetite for such an adventure anyway. But they can keep the Islamic State from fulfilling its duty to expand. And with every month that it fails to expand, it resembles less the conquering state of the Prophet Muhammad than yet another Middle Eastern government failing to bring prosperity to its people…

-------
Properly contained, the Islamic State is likely to be its own undoing. No country is its ally, and its ideology ensures that this will remain the case. The land it controls, while expansive, is mostly uninhabited and poor. As it stagnates or slowly shrinks, its claim that it is the engine of God’s will and the agent of apocalypse will weaken, and fewer believers will arrive. And as more reports of misery within it leak out, radical Islamist movements elsewhere will be discredited: No one has tried harder to implement strict Sharia by violence. This is what it looks like.
Posted by DH at 9:41 AM