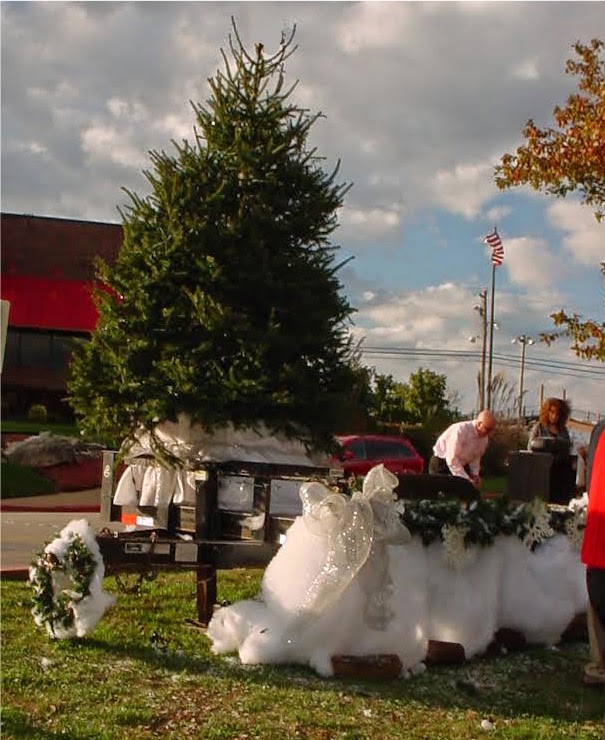 You're kidding me, right? After just one event, the "annual" Christmas Tree Lighting at the Andy William Moon River Theater in Branson has been tossed aside.

Well, not without a polite protest and an effort, however mild, to get the theater folks to reconsider.

Below is the note I sent to the Branson newspaper, a few radio stations, the Chamber of Commerce, and the tourism bureau. We'll see what happens.

Last year we had a wonderful time at the First Annual Christmas Tree Lighting outside the Andy Williams Moon River Theater. Though the event received almost no promotion at all, there were around 300 people on hand (even before the matinee audience exited the theater) to enjoy the festivities, including remarks and music from the Lennon Sisters, the Osmonds, and other Branson stars. We also enjoyed delicious cookies handed out by the cutest of Santa’s elves.

We are planning a return to Branson this fall and were looking forward to attending the Second Annual Christmas Tree Lighting. However, a call to the theater office resulted in the news that there wouldn’t be one. Wow. That was a bummer. We were told there had been “a change of hands” and so the event was off. That’s really unfortunate for with a minimum of effort, the tree lighting could provide a lot of community unity as well as positive publicity for the theater and the Branson area. Plus, it could make for a great kickoff to the Christmas season, completely true to the tradition that Branson’s Christmas begins when Andy Williams says it begins!

So, what do you say? Is there any way that the powers that be might reverse their decision? It seems a pity that such a neat idea should fade away after such a promising start. Perhaps we’ll have to bring cookies from our home here in Omaha and pass them out in front of the tree there, in sad recognition of a lost opportunity.
Posted by DH at 12:49 PM