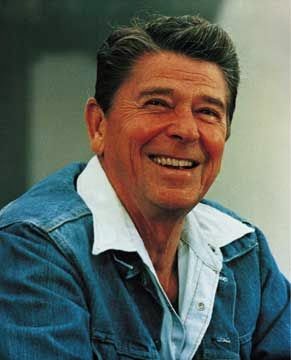 I was sitting in a room, and across from me, about ten feet away, was seated the then governor of California and soon-to-be president of the United States, Ronald Reagan.  I had the opportunity to ask him some questions.  I said, “Governor, I would like to ask you a very important spiritual question.  If something were to happen to you and you were to die and stand before almighty God, and He said to you, ‘Why should I let you into my heaven?’ what would you say?”

His response was surprising.  He doubled over, put his head down between his knees and stayed there some time.  Then, after about thirty seconds, he slowly straightened in his chair, looked me in the eye, and in a very sober tone said, “I don’t deserve to go to heaven.  The only thing I could say would be, ‘For God so loved the world, that he gave his only begotten Son, that whosoever believeth in him  should not perish, but have everlasting life.’”

(From  D. James Kennedy's Risen Indeed: Evidence for the Resurrection, Coral Ridge Ministries, 2005)
Posted by DH at 9:21 AM