Releasing the Dogs on All Nonconformists 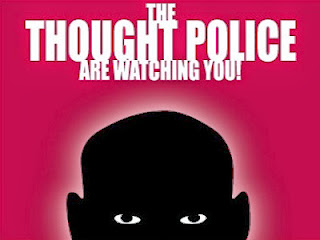 Imagine going to work one day only to be, in effect, fired -- not because of anything you did or didn’t do at your job, but because of something you did in your personal life.  Something religious.  Or maybe, something political…

That’s exactly what happened to Brendan Eich, a highly-respected tech guru in Silicon Valley and co-founder of Mozilla Corporation, after he was appointed CEO in late March.  In less than a week, he was forced out of this position for no reason other than that he had a made a $1000 contribution to the Prop 8 initiative in 2008.  His own money.  On his own time.  In his private capacity.  Mozilla had nothing to do with it…

Welcome to the brave new world of thought police, coercion, injustice, and the rigorous persecution of persons of conscience.

Ah, America. The land of the free and the home of the brave. The city shining on the hill.

It was nice knowing you.

Here's more of Sally Zelikovsky’s excellent article for American Thinker, "Brendan Eich and the New American Totalitarian State."
Posted by DH at 9:28 AM