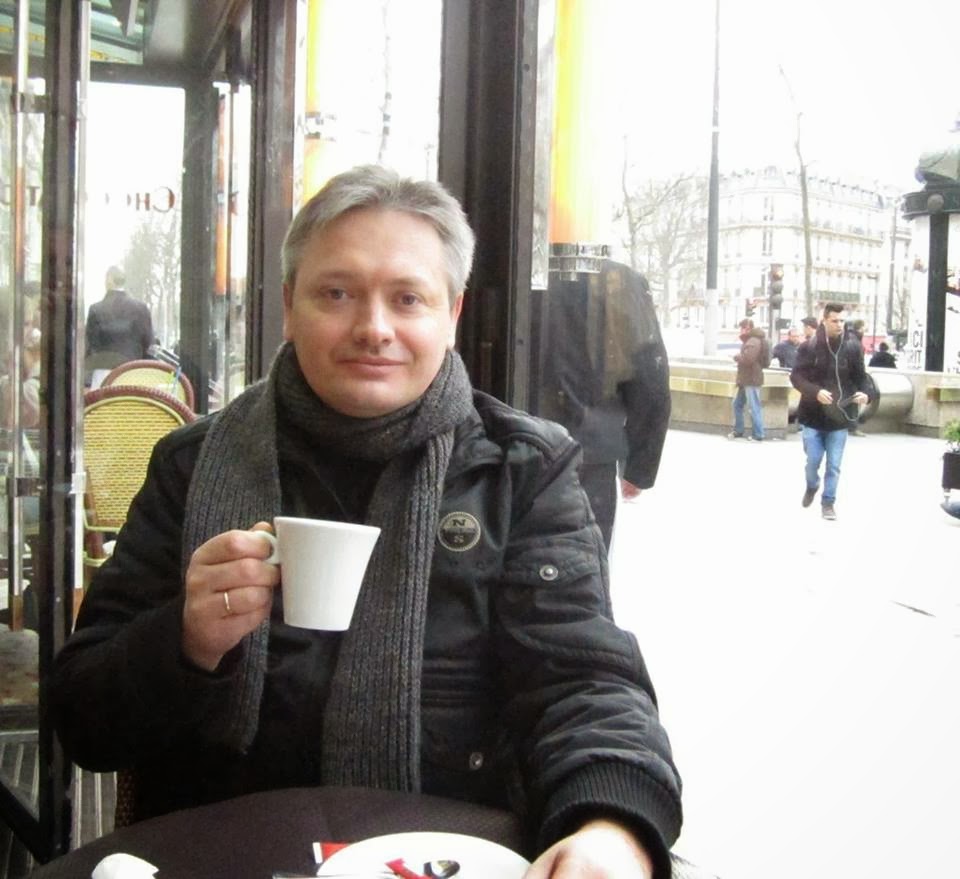 Earlier in the week, I posted a brief account ("Hleb Goes Back to School") of Hleb Yermakou's first day in Omaha. As his time here draws to a close, I'll go ahead and review his hectic but quite productive schedule since then. Indeed, I'm pleased to say that days two through four of Hleb Yermakou’s visit to Omaha proved to be as solid and delightful as the first day he was here.

Wednesday started off with a breakfast conversation between Hleb, Claire and I at La Peep's restaurant.  Then Hleb checked in via Skype with his wife and kids back in Minsk.  He also talked with one of his colleagues from Encouragement International as they planned next week’s schedule in Los Angeles.

After these things, Hleb and I took off for South High School. Teachers there had been in discussion with Student Venture director Gary Warrick about bringing Hleb in to address a Human Geography class.  That went very well.  Hleb was in fine form – informative, personable and entertaining – and the students really got into the presentation. Hleb's talk was also a neat connection to Gary's ongoing SV chapter there at South.

Next up was a cup of coffee at the Westroads Panera with some profitable conversation about church life, sanctification, the problem that VDPs (Very Draining Persons) pose to ministers, and more.  Hleb also fit in a quick shopping trip to get a dress for his daughter -- on sale!  We then moved on to KCRO where Hleb taped a quick program with Jackie Mahr and then did a live ½ hour show with Greg Vogt and Make Shane. Both were very good.

Wednesday closed with another dessert meeting, this time at our house.  The previous night Quint and Carol Coppi had served as hosts for 9 other people in an exciting meeting that lasted 2½ hours. The meeting Wednesday night had a similar feel -- 9 guests, an interesting, compelling presentation by Hleb which covered a host of topics, and a lot of questions. We went three hours that night!

After such a pace for those first two days, I figured Hleb needed a little extra rest so I let him sleep in Thursday morning while I joined John and Pat at Panera’s for our regular fellowship at 6:30.  But Hleb was ready and raring to go when I picked him up later for the next event, a talk to young adults enrolled in a special GED program. We met Gary at the Boys and Girls Club at 27th and Hamilton for this event.  This was a really active group of about 20 people and they responded well to Hleb’s testimony of conversion to Christianity.

Hleb's next job was to give an address to the Student Venture group meeting at Central High School Thursday night.  Claire and I had a “When Swing Was King” presentation at Brookstone Meadows at 6:30 but Gary picked him up at our house, grabbed the pizza, and headed down to the club. It was, as we learned later that night, another terrific opportunity for the Lord to excite, inform and stimulate to action young people through Hleb’s ministry.

Day four started with breakfast at the Westroads Panera with Hleb and a brother in Christ who plans to join the team of Encouragement International. I dropped Hleb off for this meeting, briefly spoke with the other guy (a recent transplant from California to Nebraska), and took off to get some other work done.  It turned out that Hleb had a productive time and, at the end of the 90-minute conversation, he was encouraged and excited at the prospect of being ministry partners with this young fellow, a recent graduate of Master's Seminary.

The next speaking engagement took us back to Omaha Christian Academy for a high school world history class.  The teacher had let slip that the students had been studying the Byzantine Empire and he was delighted when Hleb began his talk with insightful comments about that very subject!  The rest of the talk went well too and there were, like the previous classes, plenty of engaging questions. At the end of the talk, Hleb was presented a folder full of thank-you letters from the students. There’s no doubt that Hleb has left a wonderful impression on Omaha Christian Academy with his four visits.

Friday night proved to be something really special. It was another home visit but this one took us towards Blair. And it wasn't a dessert we were looking forward to but a meal. And what a meal! Perly and Sandy Schoville had prepared a very festive, very elaborate, and very American gift for their new Belarusian friend.  Indeed, they served up for Hleb (and 8 others) a full, traditional Thanksgiving dinner, complete with turkey, mashed potatoes and gravy, sweet potatoes, oyster dressing, rolls, mushroom dressing, asparagus, cranberry sauce, and two kinds of pie!  It was a splendid meal – fun and delicious – but the fellowship with the Schovilles and the friends they had invited along was even more enjoyable.  Thanks so much, guys!

What’s left?  Well, we had planned today (Saturday) to drive Hleb down to Kansas City to meet friends there. But the weather not being the greatest (there and here), we decided to make this a day of rest.  We're listening to music, conversing, reading, dining on chili and orange scones -- all in the warm glow of logs burning on the grate. Very nice.

Tomorrow will be Hleb's last day here in Omaha.  He will be delivering the morning sermon at Faith Bible Church at 10:30, followed by a lunch with friends afterward, and then another home fellowship meeting at 2 o’clock hosted by Allen and Cindy Nelson.  All in all, a very full week and we're so grateful to the Lord for allowing us this time together. We hope and pray that he has made many new and lasting friends while here.
Posted by DH at 12:32 PM