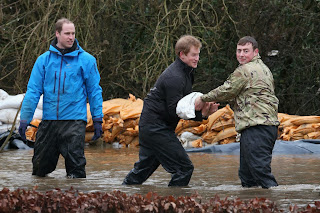 Last week heavy rain and 80-mph winds in Great Britain caused havoc on the rail network and rising waters endangered farms and homes. British soldiers were called on to provide help in the form of sandbagging labor. And they were joined by volunteers too — volunteers like the heir to the British throne Prince William and his little brother, Prince Harry.

This was on the same day that, over in this country, Michelle Obama's airplane closed down the Aspen Airport in order that she and her personal entourage could go skiing.

And yes, the world notices.