The Road to Rochester 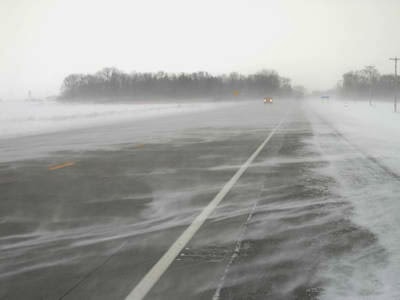 Yesterday morning, Claire and I headed out to the airport to pick up our rental car. Claire had found quite a deal from Alamo: three days, unlimited mileage, full-size vehicle for $70. Wow. And the vehicle turned out to be a very new (less than 200 miles) black Nissan with keyless start.

We didn't appreciate how nice was the black color until we realized what a contrast it made to the blowing snow we eventually encountered on the Minnesota roads. And for anything that helped us be more visible to other drivers in that whirling confusion of white, we were very, very grateful.

Along with us for the ride was Pat Osborne, a dear friend of more than 40 years. And the reason for the trip was a L'Abri conference convened in Rochester for Friday and Saturday that Pat had told us about. In fact, Pat has attended several similar conferences here over the years and, knowing that we have long shared his respect, affection and appreciation for the ministry of Francis & Edith Schaeffer and the L'Abri community, he invited us to come along for a special blessing.

I read my first Schaeffer book ("The Church at the End of the 20th Century") in the spring of 1971. Shortly after, I traveled with a few friends to Covenant College near Lookout Mountain, Tennessee for a conference which featured the Schaeffers, Hans Rookmakker, and several other members of the L'Abri team. I was hooked. And, as many of you might know, it was the influence of Francis Schaeffer that the Lord used to move Claire and I into pro-life ministries in the late 70s -- and way beyond.

But back to this conference.

The first several hours of the trip were really great with conversations covering a whole host of topics. Yes, we had high winds along the way but it wasn't too bothersome. Until we hit the blowing snow. Very scary stuff. And very weird too. Because these terrible conditions (snow blowing across the road, forming patches of very dangerous ice) sometimes occurred as the sun was shining. Things got a lot worse when we turned off I-35 at Albert Lea and headed towards Austin and then Rochester. Higher winds. More ice. A dozen semi-trailer trucks off the road and even more cars.

We were so pleased and grateful that we had left early in the day. For another hour and the snow would have certainly covered the white lines of the road which I used to navigate. There wasn't much conversation during those last couple of hours. Instead, there was a lot of praying -- for our safety, for the quick deliverance of those slipping off the roads, for safety for everyone else that had to be dealing with these conditions.

It was with a tremendous sense of relief then when we pulled into a safe, spacious parking space in the garage of the Kahler Hotel in downtown Rochester. We unpacked, found a local spot to have dinner, checked things out around the area, and sat down in the hotel lobby to enjoy another conversation -- this time reminiscing about the old days.

And then to a very welcome sleep.

Today we start in to the conference with four plenary sessions and three workshops. I'll give you a recap next Monday...with a few brief lines during the conference itself for those who are following Vital Signs Ministries via our new Twitter account!