Chick Webb: "The Lord Gave Me Some Years To Play" 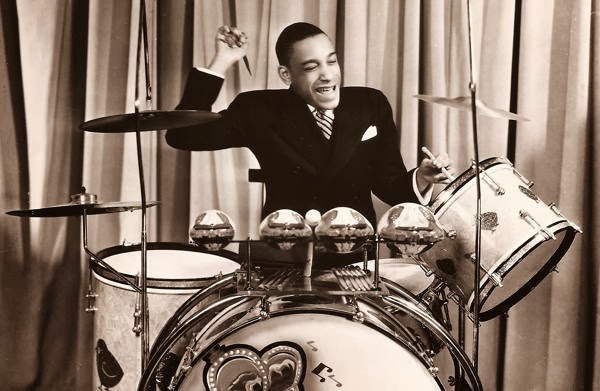 Chick Webb, one of America’s most talented and influential leaders of a big band, held court at the Savoy Ballroom in Harlem, New York throughout the 1930s. Chick was the man who discovered and mentored Ella Fitzgerald and his inventive, popular band posed a friendly rivalry to those of Benny Goodman, Count Basie, and others. However, behind the engaging and generous personality, the ever-present smile, and the happy sounds of one of the greatest dance bands in America, Chick Webb lived with pain and a knowledge that his life would not be long.

Chick Webb suffered from tuberculosis of the spine. It had stunted his growth and badly deformed his spine, giving him the impression of being hunchbacked. Nevertheless, Chick wanted to play music and he worked long hours as a newsboy in order to purchase a set of drums, the instrument suggested by a doctor who thought it might “loosen up" his bones. It did that…and more.

Chick first played professionally at age 11. And he never looked back.

In late 1938, Chick’s health went into a steeper decline. The pain grew worse as did the exhaustion and lack of mobility. But he kept playing, knowing that the musicians in his band needed the jobs that were otherwise so hard to find in the Depression. But in 1939, at only the age of 34, Chick Webb collapsed and was taken into Johns Hopkins Hospital in Baltimore, dying shortly afterward.  His last words were, "I'm sorry, I've got to go."

It was sometime earlier, however, that Chick Webb explained to a reporter the reason he was able to go on, to delight music lovers all over America despite his severe limitations. Said Chick, “I can't understand the pain God gave me, I can't understand my sickness, but that's secondary. The main thing is, the Lord gave me the talent to play drums. He gave me some years to play. That's what I wanted to do.”

The music of the Chick Webb Orchestra is regularly featured in the “When Swing Was King” presentations that Claire and I give in nursing homes and senior facilities. We love it and so do our audiences. But knowing more about the man makes that music not only enjoyable, but inspirational too.