Does the Pro-life Movement Need To Be Stretched? 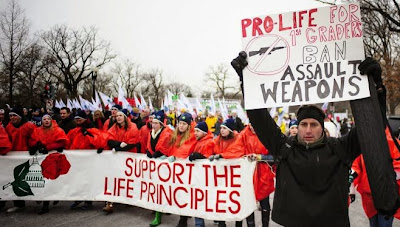 In this perceptive piece in the American Spectator, Mark Tooley examines the very serious problem of pro-life leaders being pressured to weaken their movement against abortion by requiring the movement to include equally zealous opposition to capital punishment, military action, “assault weapons,” pollution, and more. Indeed, some would force into the movement the issues of federal aid, minimum wage, vivisection and animal testing, toleration of tobacco, legal marijuana, ObamaCare -- the list can be long indeed.

And, of course, with every added issue, the force brought to bear on the blasphemous, cruel murder of children in the womb is lessened...which is exactly what the liberals desire.

Po-life activists, beware. This is a very bad bargain.

This last week’s March for Life recalling 41 years of judicially imposed abortion on demand aroused some confused religious commentary about the meaning of pro-life. Most of Christianity has traditionally opposed abortion as uniquely pernicious because it destroys a completely innocent and vulnerable life, in most cases only for convenience. Yet some try to stretch “pro-life” to include their own political preferences in ways that dilute focused opposition to abortion.

One example is Evangelical Left activist Shane Claiborne, a well-intentioned neo-Anabaptist enthusiast popular in some church circles. He recently and admirably urged being “Pro-life from the womb to the tomb.” And he asserted: “The early Christians consistently lament the culture of death and speak out — against abortion, capital punishment, killing in the military… and gladiatorial games,” which, excepting gladiators, he thought “profoundly relevant to the world we live in where death is so prevalent.”

Claiborne of course is a pacifist who opposes all violence, including military action and capital punishment. Whether the Early Church agreed is debatable. But historic Christianity has affirmed both the death penalty and warfare in some cases. Never has orthodox Christianity likened aborting an unborn child to a judicially adjudicated execution of a murderer or to the waging by legitimate authority of a just military action. Even serious Christian ethicists who share opposition to capital punishment would grant its deep moral distinctions from abortion…

The elasticizing of “pro-life” was also demonstrated at the March for Life by Evangelical environmentalists, one of whose leaders there emphasized “that the unborn should be protected from toxins and pollution that they are in no way responsible for.” His group targets the impact of toxins on pregnant women and babies. A critic of this approach told the Christian Post that stretching “pro-life” weakens the cause of specifically defending the unborn. He also distinguished “an intentional threat to life,” such as abortion and euthanasia, versus “unintentional threats to health,” such as pollution.

Over extending “pro-life” to entail a long laundry lost of political goals that includes abolishing capital punishment, opposing the military, denouncing “enhanced interrogation,” eliminating nuclear weapons, demanding more environmental regulation, expanding the Welfare State, perpetuating Obamacare, and raising the minimum wage is ultimately to neutralize the term and the movement. Likely some on the Left are fine with that goal. But defending the unborn, one million of whom are legally destroyed annually in America, is sufficiently important to merit its own proprietary terminology and unique movement exclusively focused on the mission at hand.
Posted by DH at 11:06 AM